Just look at this sky, photo taken by my son last week at sunset at Howard's Wharf, just around the harbour from Petone. 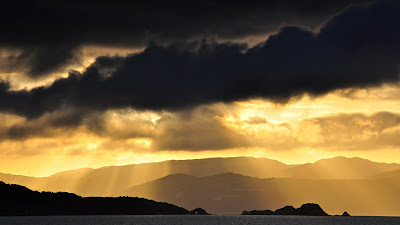 With such a dramatic scene, it would be easy to imagine all sorts of things - like ufos [not the quilty kind!] - or say, crop circles - and I have evidence that I have solved this puzzle - they are caused by lazy people like me who put out pot plant saucers full of water for the birds in this very hot weather - and leave them on the lawn........ 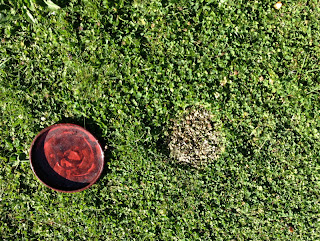 There are several in that part of the garden!

You know when you are watching a film and the heroine has to do something, urgently, like get away from the baddie or catch the hero and she messes around, drops things, catches her foot etc. etc. and you are [if you are me and not known for patience] sitting there rolling your eyes and saying unflattering things about her - well, I found myself in such a situation recently.

I was in my sewing room and noticed several large butterflies in the garden, the lovely bright orange kind.  This time I thought, I'll get a photo so I went for my iPhone - it has such a good camera - but I bought a new case for it recently.  The case is marvellous protection, sort of soft padding which means it sticks to my pocket and I almost tripped over the leg of the vintage ironing board - you get the picture?  well, I almost didn't - in fact this is the best I could do - Well, the background is in focus!  That's a pineapple sage plant just coming into flower and set to rival the orange monsters,  I think that's a cabbage tree growing through the bush - another freebie from the birds.

In another part of the garden, is this beautiful area - remember when blue and yellow was the in colour scheme?  The salvias are so happy here, they have quite taken over. 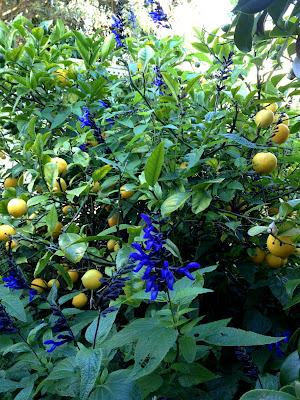 I have finally used up all the thin strips that were on the coat hanger! Calls for a drum roll I think.  It started years ago with two log cabin variations, I have shown one and will look out the other to share, then recently I did the baby rail fence that I'm currently hand quilting; then the bright and white and now the chunky rail fence - which has given me considerable trouble.

I put the strips together, separating the vaguely light, medium then dark, a la jelly roll - by good luck I had to add only a small piece on the end before I cut the fifteen strips into blocks - then started playing with them on the design wall - 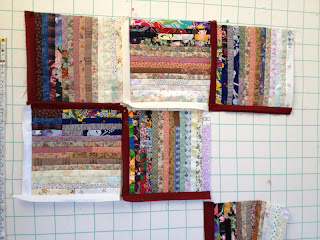 I felt they needed more delineation so added the dark red, and the white - hmmmmm 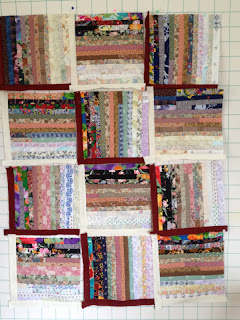 Not only did I decide the white was wrong so I changed to calico,  but I managed to make a right muck up of sewing on the strips - I got them wrong more often than right, so I packed away my unpick and went to bed! 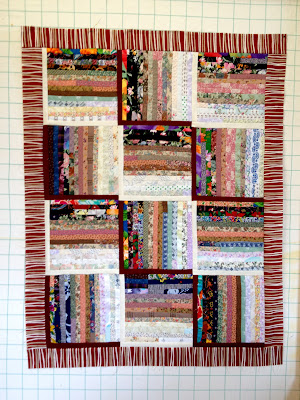 Next day it went together so easily and I love the wonky stripe for the border.  It's the perfect size for a lap quilt so maybe I'll back it with polar fleece.

I'm putting together the Venetian Dream using fabric my younger son brought back from Italy for me and resisting the urge to have a go at a turning twenty - but I also have the large container of strips of various widths so could have fun with those......

I've made a decision about my laptop which is fairly old [ as laptops go] and can't be upgraded - solved the problem actually when I knocked over a cup of tea, hurrah it only went on the corner of the laptop and I dealt with that - but .......... then I saw the charger box thingy was sitting in a puddle of tea!  Not good for it, so with that dead I wasted hours trying to buy one, last resort I tried TradeMe and got pipped at the post in an auction so, no laptop.  I already have this desktop and an iPad and an iPhone - and I no longer travel around the country as I used to which is why I got the laptop in the first place.  I just hate the waste of it, can't even pass it onto a charity or person learning........

Here's another photo, courtesy of my son Phil, taken on the south coast, the wreck can be seen as a blob on Google Earth!  Great colour scheme here too. 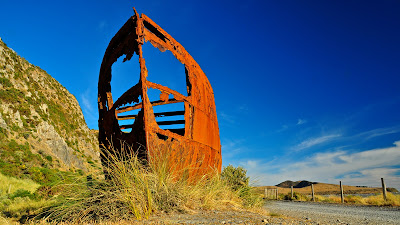 And I couldn't resist this quote, proof positive that punctuation does matter!!

Thanks for stopping by, and for your comments,
June
Posted by June at 02:02 No comments:

How's this for inspiration for a colour scheme?  One can understand why a poet would like to spend a lot of time in this area....... 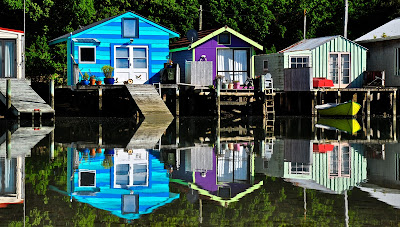 And who says that Wellington is always windy?  I hate to put a hex on the weather, but it's been marvellous [if you're not a farmer or a fire fighter!]

I was chatting on the phone with my big sister last night, what else is there to do at 4am when I can't sleep? she's a luddite so no emails, and as for Skype ?!- we nattered for over an hour.........I do hope it was cheap rates, but then it's been almost a year since our last chat.  Anyway, she says that in the south of England they are hoping that spring will come before too long; the snowdrops are out and a few daffodils are trying hard.  It's been their coldest, longest winter since 1976 - probably been that long since we had such a summer, I think.

These are the blocks I was thinking of- 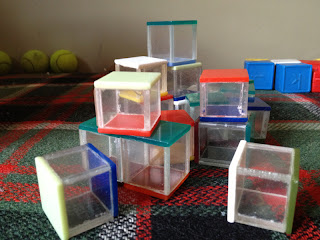 In my recent big clutter clearing session, these were amongst the toys no longer of interest to teenage girls! they are unique - truly.  One of the jobs my husband had before we started the family business was with a plastic fabrication company, where they made things from  sheet plastic.  They cut and stuck, sometimes heated and bent the stuff - the insides of salon hair dryers for instance.  Anyway, he made these from the scraps and our sons played with them for years.  Probably the pc crowd would be horrified at the pointy corners etc.

Also when I was tidying up, I went to shift a pile of quilts from the chest in my bedroom into the sewing room - they were just too heavy and one slipped off - quick as a flash, by the time I came back to pick it up, Floyd had beaten me to it! 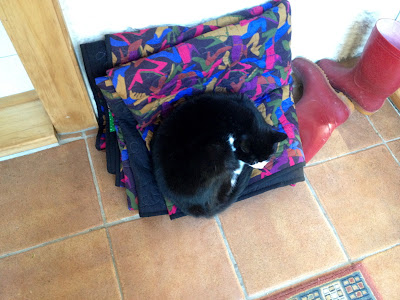 Here's another piece of vintage fabric, these pieces I'm showing are on the design wall, so they are a decent  size. 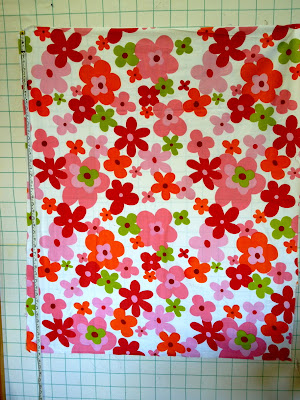 And here's some fabric I found, for we Kiwis the price is very reasonable - but how many years ago was it bought?  That shop was one of the first in the area..... 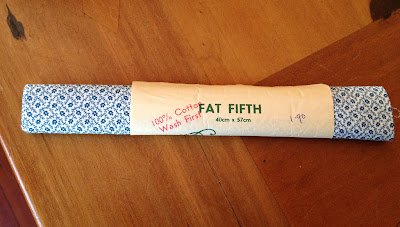 Here's the rest of the label - 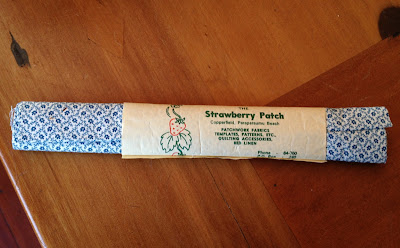 And, drum roll, here's a finish!  Almost a miniature, but it's done.  This is made from the bits left over from one of the quilts made by a Shut-in Stitcher [at Arohata prison] she tossed them into the rubbish, I rescued the bits and said I would make something from them. 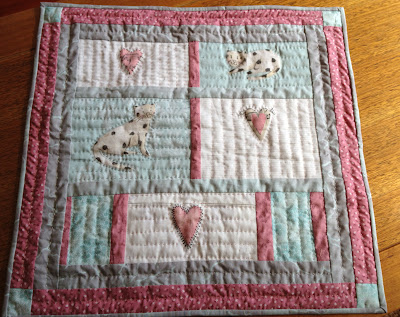 I've hand quilted it with big stitch and pearl thread, and backed it with a cuddly fabric - 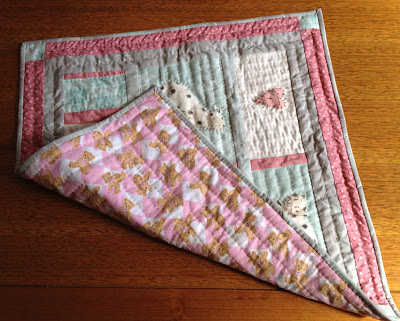 Great for a very new baby!

Here's a sunset to finish; I think that another local,  Julz, has taken some photos here too! 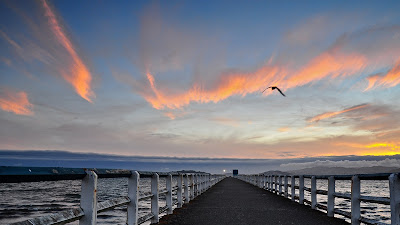 Take care, we'll talk again soon - I'm off to do battle with a top that has a mind of its own - maybe I'm just not listening??

Thanks for stopping by
June
Posted by June at 19:32 3 comments:

First something really subtle, a recent photo of evening at the river showing beautiful clouds and their reflections - such a tranquil scene. 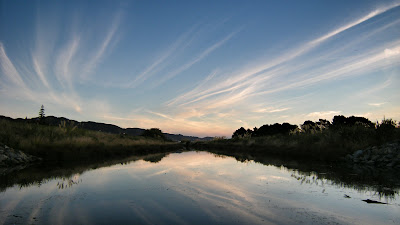 And then there's this boatshed, one of a kind I think you"ll agree, at Point Howard which is around the coast from where I live - go three blocks to the sea, then turn left....... 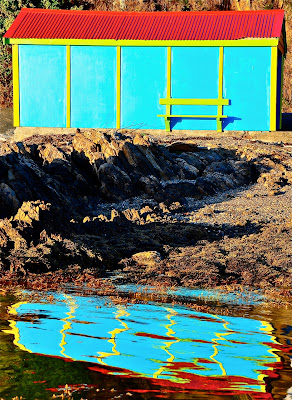 Those reflections are anything but tranquil!  Photos courtesy of my son, of course.

To things quilty - is this the oldest UFO? 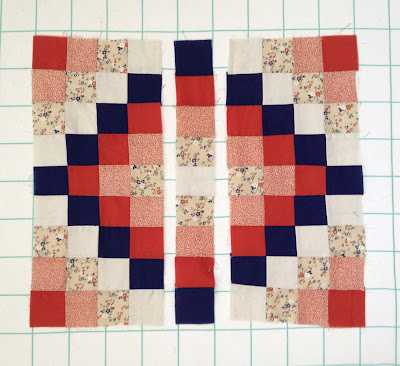 I got this far at the very first Quilt Symposium in New Zealand, held in 1984 in Auckland - oh, it was an amazing experience!  Who could forget such an event, trying to cut fabric on a sloping window cill and sew with the machine on a school desk....... then before a group of us flew back to Wellington we went out for a quick meal, were so hungry we devoured plates of scrumptious garlic bread with the butter dribbling down our chins........ and goodness know what the other passengers thought when we piled on the plane, but my husband wouldn't come near me for days!!

And still on the nostalgia theme, here are some more of my vintage fabrics, Mrs C. says she loves roses, well how about these ? 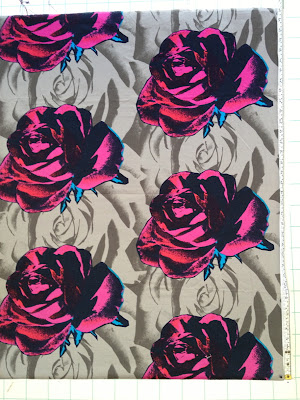 They are enormous and are destined to be the backing of the top with the striped border I showed in my last post, maybe turned into a four patch with the striped fabric as sashing - a suggestion from one of my stitching friends.......

These flowers aren't as large, and I think they are poppies, but just delightful I think 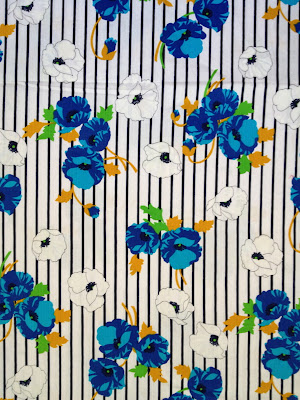 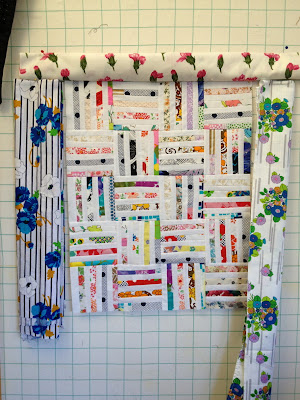 it's a cot quilt size which used up all the bright strings of that particular size I had left, I loved the fabrics; the one on the left was too strong, the one on top too cream but loved the one at the right - until I cut the pieces and put them around the little top - whoops, far too strong, the centre was swamped.

Then I found the perfect vintage - 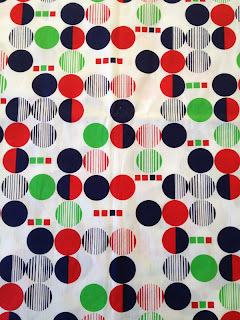 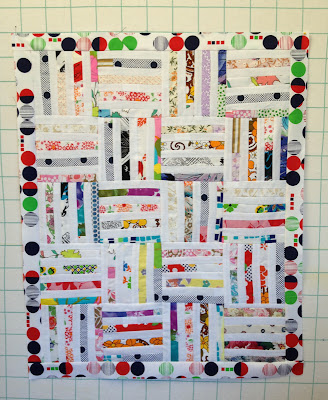 See how it picks out the polka dots?  The rejected border fabric has been re-sewn into one piece for the backing.

Now I have a request, please does anyone know what this flower/shrub is? 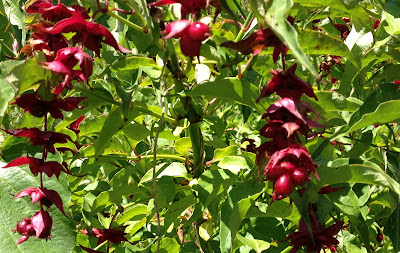 Last weekend I went blueberry picking with my daughter in law and one granddaughter into the Akatawara valley - from here, with your back to the sea go to the end of the valley and turn left at the foothills into another winding valley.

These shrubs were about twelve feet high [2m] and growing in a thick grove outside the blueberry farm. 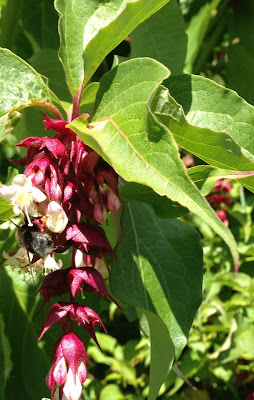 That's a large bumble bee to the left - click on the photos for a larger view.  My first go at blueberry picking, apart from the two little bushes I have in my garden which the birds are enjoying....... a very pleasant afternoon and much less dangerous than blackberry picking I did in the UK as a child!

I will leave you with a photo taken last night, at Point Howard Wharf just a bit further round the harbour from Lowry Bay [I think]  It was such a beautiful evening and who could resist a boy and a dog? - certainly not my son! 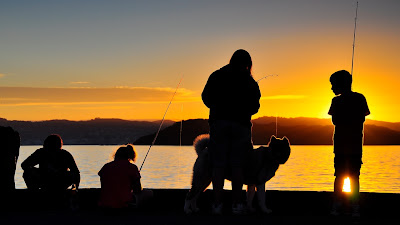 and a quote from Albert Schweitzer, "An optimist is a person who sees a green light everywhere, while a pessimist sees only the red stoplight........the truly wise person is colorblind."

Thanks for stopping by, my apologies for not posting more often - I have so much to share but sometimes life gets in the way!!