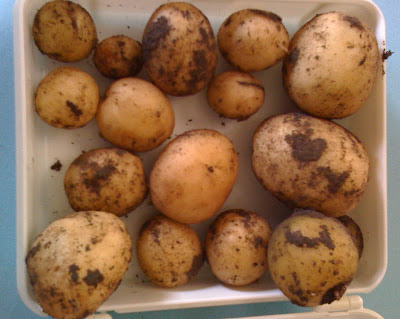 As it happened I didn't need my wellies and it was overkill to use the big garden fork - wouldn't you know I managed to spear one of the er um larger potatoes.

To put my harvest into perspective, the container is five inches by four!!

But they were delicious! boiled gently with a little salt and a large sprig of mint.

I'm sure Leanne will appreciate my enthusiasm for the home grown and realise I am not in competition with her 'garden tails'.

The bathroom renovations are progressing - I now have a laundry tub and am so looking forward to using the large shower box - still a few days off as yet.

I think I mentioned that I have joined a Book Club and have also discovered ebooks and Fishpond and was delighted to see a copy of Mister Pip at a very reasonable price - I have been meaning to read it for ages....... 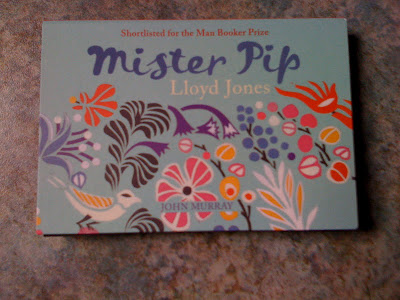 Such an attractive cover but isn't it sideways? 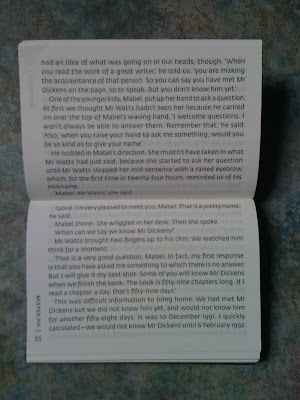 It's a Flip Book!!  I am sure I saw an item about them on TV recently and now I have one - it's only a bit larger than reading on my iPhone - at least with this variety of book I shall know when the end is approaching!

I have put a border onto the railfence/jelly roll, I wasn't actually looking for one but getting something else out of the cupboard and this jumped out at me - 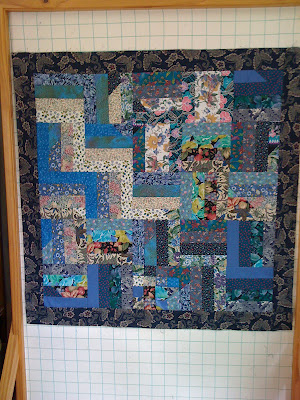 The slides in the title are of the photographic variety; I have spent ages sorting through many years of slides.  Sadly quite a few have deteriorated so they are useless however I still ended up with over five hundred so during the week I high tailed it into Wellington to take the slides to Image Lab where they were very helpful, so before long I shall have easy access to much of historical value! well, to our family, including slides of building a retaining wall after a slip when we lived in Roseneath.  I shall no doubt bore you will some in the weeks to come.

Do you want a present for the friend who has everything? well, how about this little gem from the December 1st, 1949 issue of Australian Home Journal?

Well, it looks as though this will have to wait, according to Blogger I am out of my free space for photo storage - first I have heard of this, so I shall have to look into it and hope I can get back to you.  If anyone else knows what is going on, perhaps they could email me - it could possibly save a lot of time.

While I was in town dealing to the slides I called into Minerva and found a fascinating magazine called "Artful Blogging" Visually inspiring online journals - I can see I shall have to set a LOUD alarm once I start checking them out.  I also found a pack of cards of Forgotten English and today's little gem is - "after all this housework I am completely forswunke" - exhausted from physical exertion.  And I am sure we all know a few tirelings - people who are easily fatigued by physical exertion!!

Have a good weekend, nice talking with you.
June
Posted by June at 21:12 No comments:

Shape Shifter in the sunshine 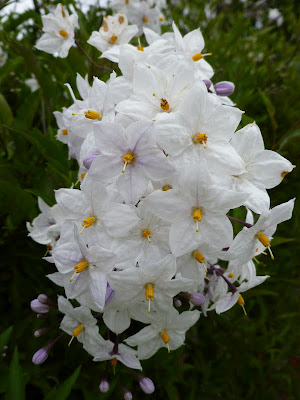 Such a beautiful spray and they do look like the flower on the potato plant - which reminds me I must seek out my Wellies and get into the garden behind the borage plant and see if there are any potatoes in the soil.  My granddaughter planted some for me last year and I had forgotten all about them.

I used to have a huge potato vine growing all over the little garden shed that was demolished to make way for my new garden shed/sewing room - this plant is in the garden of a friend.

If you are in the Wellington region and haven't yet been, I can recommend the exhibition at the Civic Gardens, the Shape Shifter sculptures are amazing, interesting and just plain fun.

My son and I had brunch at the cafe at the Dowse then strolled over to have a look.

I don't know what I expected to see, but it wasn't French Knitting, by Mia Hamilton, draped all over a large tree! 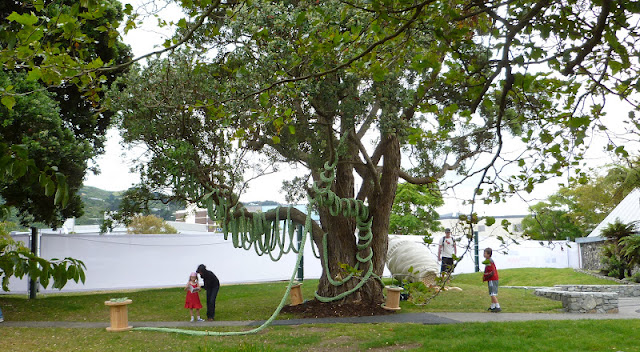 On a totally different scale was the Robot Army vs The Rabbit Proof Fence by Sean Crawford. 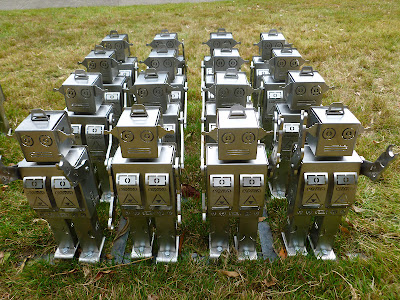 I got between them and the fence - they are about a foot tall.

On a much larger scale, is the Giraffe by Greg Bloomfield - wind driven and so colourful. 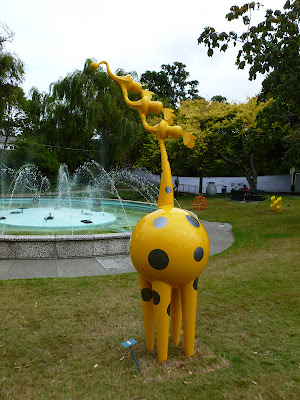 And now for something completely different, here is an exquisite wooden vessel by Graeme McIntyre.  These were in an indoor display area in glass cases so the items appeared to be floating - I apologise for the flash bounce but without it the colours were all wrong. 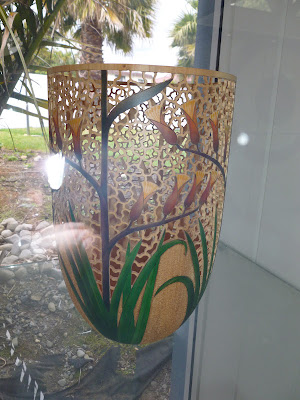 The exhibition is open until 18th March, [$5 entry fee] from 10 to 5 daily with a late night on Thursday until 10pm when you would get the full benefit of the many light displays.

Last Thursday was the monthly meeting of Wellington Quilters Guild where the speaker was Clare Smith.  She brought along the amazing costume she constructed which was based upon a portrait of a Duchess, the portrait is hanging in the Dunedin Museum.

We were treated to the full details of the difficulties of constructing such a costume, keeping the cost to under $200 and with a deadline of the show that is put on at the end of their year. 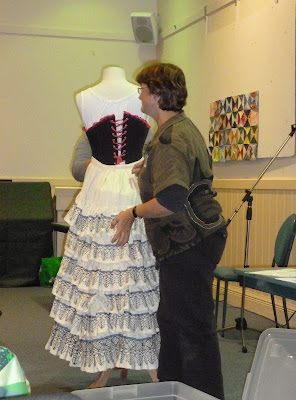 Here are the undergarments made previously, the corset and underskirt - and those yards of frill were screen printed by Clare and draped for miles around her garage to dry - nothing like the good old kiwi No. 8 fencing wire spirit is there - but wait until you see the actual dress! 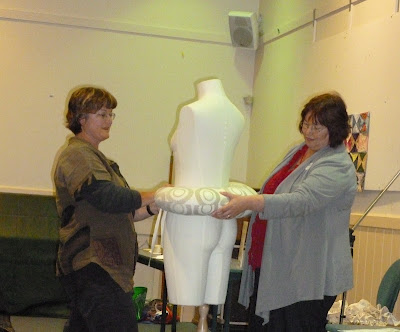 Clare and her assistant putting the necessary padding onto the model, then there was  the corset, the  frame and then petticoats before the actual dress.  No wonder the aristocracy had lots of servants! 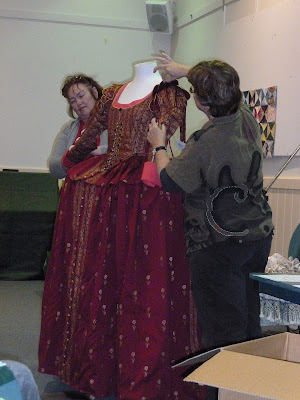 The outfit had jewellery, a ruff, lace cuffs and a fan but what amazed me was that the fabric for the dress was plain, the beautiful gold work was done by Clare, screen printing.

It was such an interesting evening, great fun too; we are so lucky to have such talented people willing to share with us.

I am hoping to be able to share with you a couple of quilts made by the Shut-in Stitchers, one is the first non squares quilt that K. has made, she was intrigued by the Re-arranged Triangle technique; one from my 5" squares class.

Make a pair of half square triangles by the method of placing two squares face to face, draw the diagonal line, sew either side, then cut on the drawn line.

Then cut the resulting triangles in quarters - 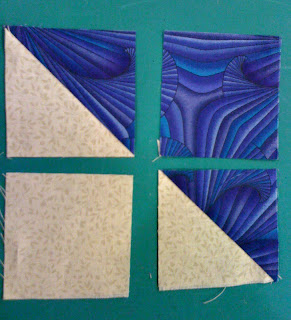 Re-arrange the triangles to make a dark unit - 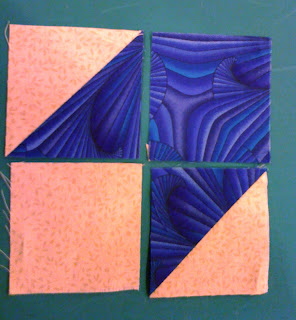 Or a light unit - 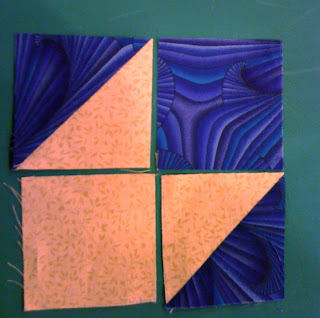 There is of course another way, by turning the half square triangles to face forward or back, but I don't have a photo of that - and speaking of photos, the colour is weird, these were all the same triangles - maybe the sun went in, or came out!

K. is making a quilt by putting four together using soft colours - I showed her another way to make a block -  make four patch blocks and arrange like so - 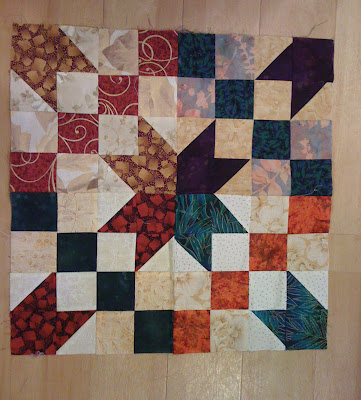 Lovely quote today from Jean Giraudoux, "Only the mediocre are always at their best." - ouch!

Thanks for stopping by,
June
Posted by June at 01:42 No comments: 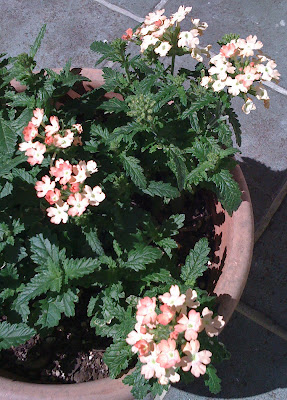 What was that I said once about reading the labels?  I just love the delicate colour of the blooms, but they need full sun and that's not easy in my garden - what with my shrubs and the huge trees on my neighbours' sections - so my solution was this pot so I can easily move it around - and it's working.


The big storm at the weekend came just as they weather man predicted - I was contacted by a friend with a wind warning from Civil Defence, so after much thought I decided to cancel the quilting programme at the prison for that morning.


It would have been rough driving there and the site is somewhat exposed, always colder there than in town.


Really I got off lightly, a few puddles around the section, the lawn and deck covered with leaves, a few small branches snapped off and a good excuse to have a lie in and spend the day sewing. 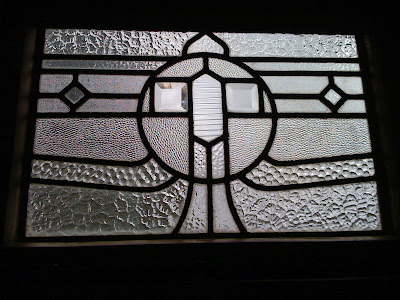 Did you ever make a stained glass quilt or wall hanging?  I seem to remember doing one, I wonder what happened to it; perhaps it's in the Orphan Block container.....


I have started hand sewing the binding on the Puss in the Corner quilt, I found it all ready cut in the container; it is the same fabric as the inner border and is looking good I think.  - 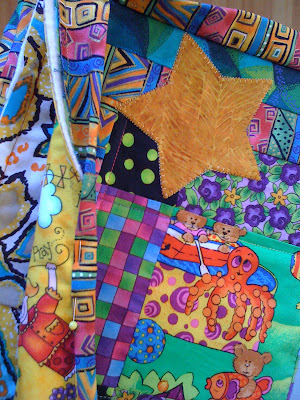 You can see where the border goes under the star, and having struggled lately to join the ends of the binding with a diagonal seam, this was joined straight - diagonal looked far too obvious!


Perhaps you also remember the jelly roll - my version - that I joined using strips cut from twenty blues on the same pile - well, it wasn't a huge success, so a friend and I unpicked it into strips - 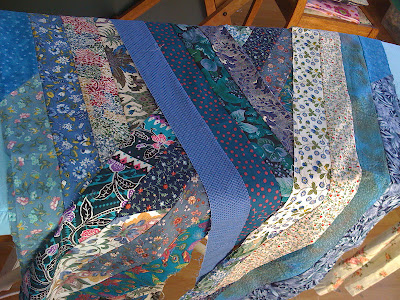 Four strips wide, which gave me this - so I then subcut this lot into squares - 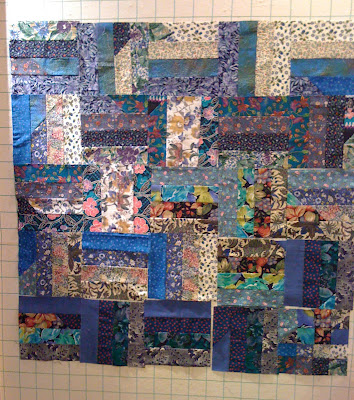 and put them onto the design wall as I cut them, then I fiddled a bit - 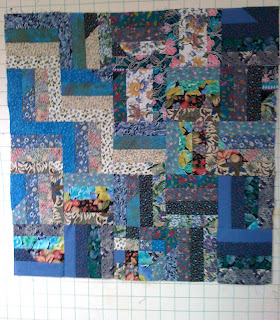 Sort of Rocky Road maybe?  How's this for happenstance - when I had cut all the squares I had short pieces left over and I sewed them together to make the sixteen patch block in the middle of the bottom row!  So really no waste at all!


I haven't been out to Pete's Emporium for quite a while, last time I went there I bought the plastic square rule with the sharpener on the edge.  I said I would let you know what I thought; well, it is a good size and I can hear the rasping which I suppose is the rough edge sharpening the blade; can't say I have noticed any real difference though - and, one downside to the coating is that I find it difficult to see dark fabrics - 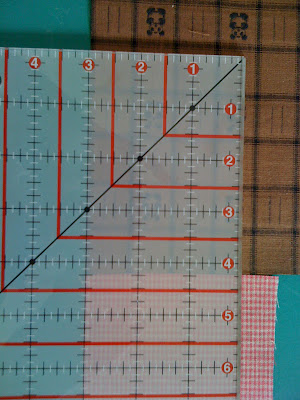 Maybe I just need a good natural light over the cutting board.


The bathroom is progressing, and tomorrow I shall have a shower - at my son's house!!  I am not moaning, I do realise how lucky I am in so many ways.  As Ralph Emerson put it, "Don't waste yourself in rejection, nor bark against the bad, but chant the beauty of the good."


Great talking with you, thanks for visiting.
June
Posted by June at 23:24 1 comment: