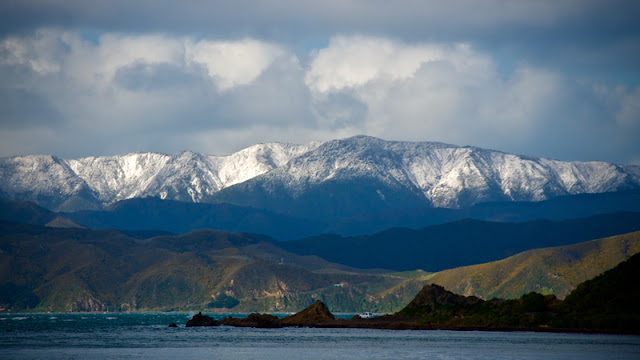 Viewed from Kau Bay, Wellington the hills are decidedly icy looking - or as the weather forecaster says several times a day, bone chilling - and he's right.  This is how I like to view snow, from a distance or through double glazing.  Photograph taken by Phil a couple of days ago.

Log Cabin is one of my very favourite quilting patterns, particularly those made from scraps as this one was - 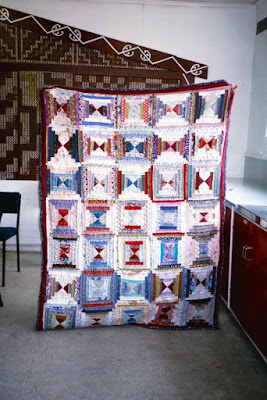 This quilt was made several years ago when we were allowed to take a camera into the prison, and that's the classroom where we still teach [without a camera!] however cameras were allowed in recently to show the latest class, 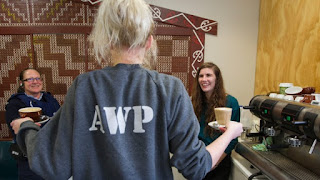 an officer in uniform and the baristas teaching - the blonde in the prison uniform........ all part of the Reducing Re-offending programme.

As you can see from the list alongside my blog, I like to follow several quilters from around the world and Kevin the Quilter has been one that took my eye when he was part of the big American campaign to make quilts for veterans, he's also keen on scraps.  Well this was one of his photos that appealed to me - 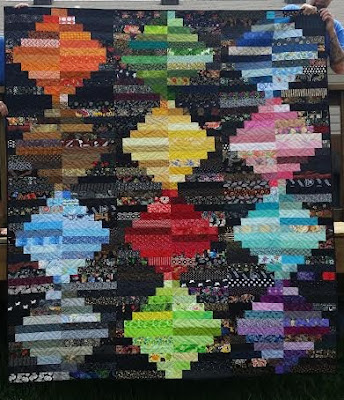 There was also something very familiar about it, which set me to searching through old photographs and reminded me of a comment made by a friend who was very experienced in both quilting and embroidery - don't think you've invented a new pattern or way of doing something, you just haven't read the book yet - 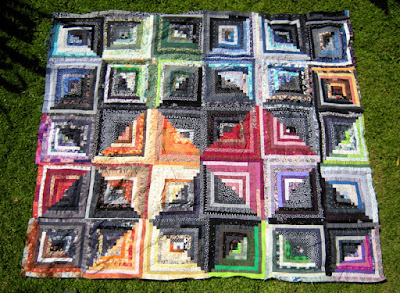 This quilt top was made about six years ago by one of the Shut-in Stitchers who was so enthusiastic about scrap quilts.  Her idea was for black and bright in a log cabin setting - I think she did pretty well, don't you? 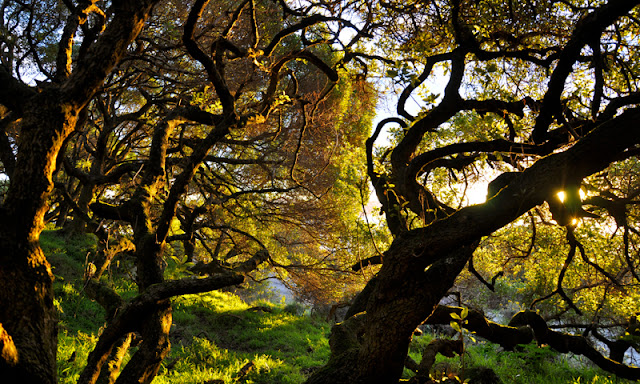 Just the sort of tree for goblins and elves to inhabit!

After teaching on Saturday at the prison, three of us went for lunch to Kaizen, the coffee shop at Pataka Museum complex in Porirua; there's always something interesting on, this week it was Wood Turning.  My late husband enjoyed working with wood, whether it was putting up shelves, doing alterations or turning on the lathe; I have many beautiful platters and bowls he made - as have several of our friends.

The first item on show that caught my eye was a quilt pattern - well, ok, patterns that quilters and others have used - 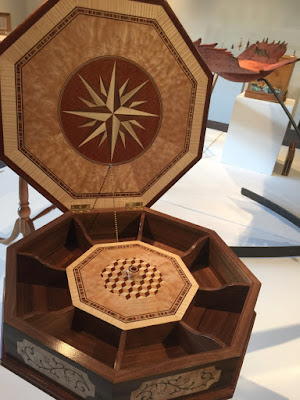 Mariner's compass and baby blocks in a beautiful jewellery box.

I continue to stitch the scraps into Mile a minute - but will call a halt shortly - I swear there's more fabric on the table than when I started. 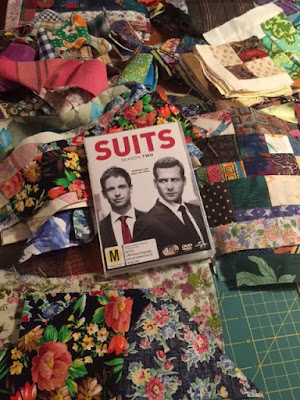 I'm enjoying watching the dvd of Suits too - or rather having it on while I sew, the beauty is that if I miss something I think might be important, I can always back it up.

Greetings to my new follower, A Passion for Vintage Textiles - how could I not follow her blog, she lives in Canada, used to live on the south coast of England, and loves vintage textiles!

I'd better get to bed, office work in the morning, so I'll leave you with another view of the snowy hills, and the thought 'Nothing is more powerful than an idea whose time as come". Victor Hugo. 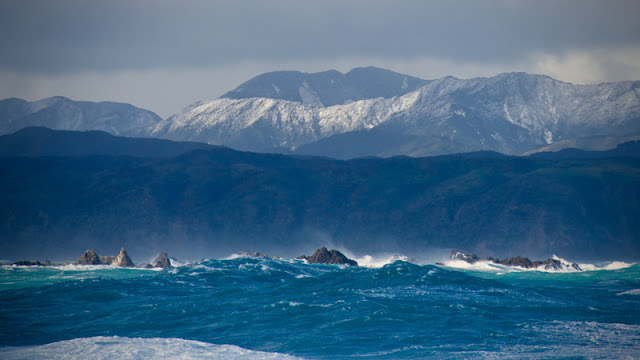 This photo was taken from Lyall Bay across the harbour, definitely not the weather for a ferry crossing!

Thanks for reading my blog, and leaving comments - I love to hear from you. 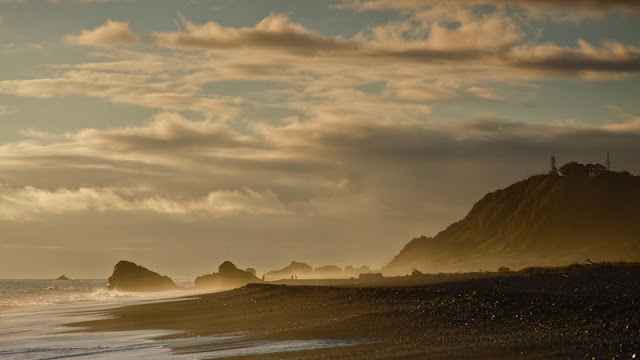 Last weekend I had dinner with my family before we watched the rugby game - hurrah, that a New Zealand team won the final! [they were actually both NZ teams] and afterwards my son, in charge of the remote, flitted through different channels and we found a most interesting documentary on the coast - so we saw many, many coastal areas in Europe where people were packed onto the beaches with no room to swing a towel let alone a cat!

I suppose it's what you're used to, but the beaches on the south coast of England, where I grew up were just that - beaches - with rocks and sand now and again, seaweed and globs of tar from when the ships cleaned out the tanks as they sailed to or from Southampton, and miles of room between small groups of people. 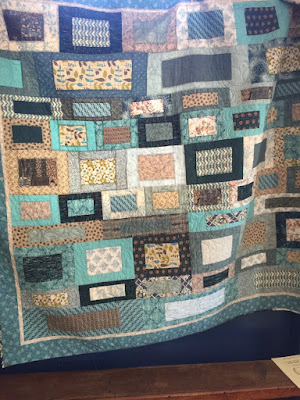 Very controlled colour scheme and simple shapes - love those squashed squares, and the maker is.........a member of the club ?!  apology........

So, hung for a sheep - here's a marvellous quilt with felt applique  - the owl looks cross eyed, or just cross! but sweet! 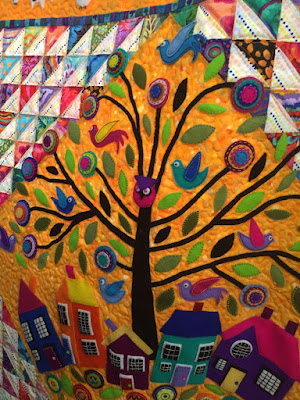 The speaker was Jenny Hunt, it was great to see Jenny back in Wellington again.  You can see examples of her work in the NZ Quilter and she's promised to start blogging soon........

Her work is so distinctive, she does amazing trees and birds - 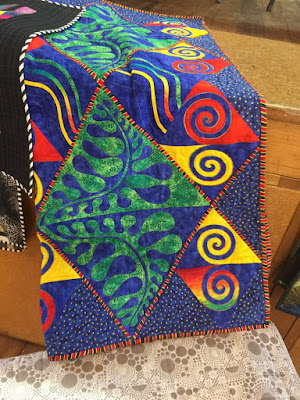 Now for an erratum - recently I posted a photograph taken by Phil and said it was of White Rock with a seal on the top - well, White Rock is huge, humungus, no way a seal would get up onto it, but this rock is smaller [and is also white with a small w ] 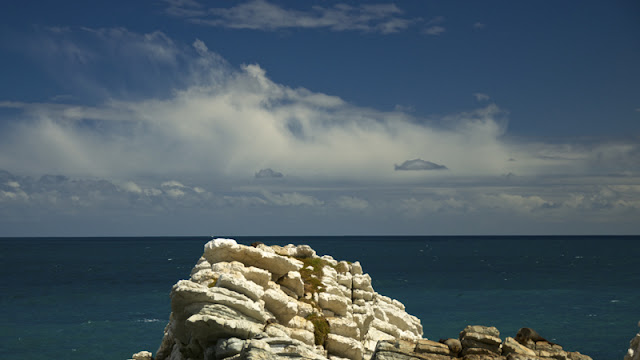 and the seal is sleeping along to the right on the not so white part of the rock!

I didn't get along to the stitching group on Wednesday, duty called from the office, so I'm hoping to go this week to find out more about the Hostel where our quilts will be used.  Here's the last two - 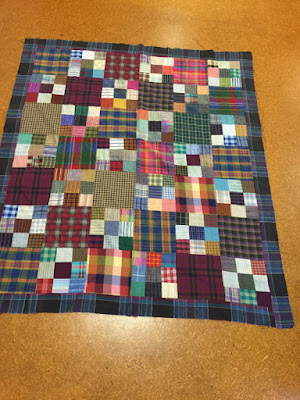 A simple random nine patch with checks and plaids and the last one is one of the red, black and white tops I've made after getting carried away with choosing fabrics to make just one! 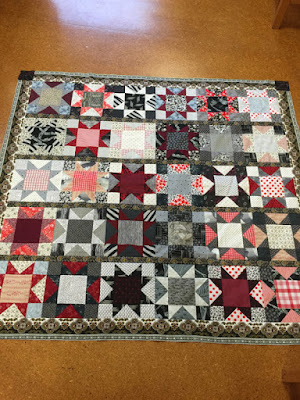 The technique was to choose the fabrics, then cut an entire block from each piece, get four paper bags (remember them?) and number one to four, put all pieces for the centre square, No. 1 in one bag, the four corner posts into bag No. 2 etc.  Give all the bags a shake, then start making blocks taking a piece from each bag; it's entirely up to you whether you edit any of the choices, I didn't and it didn't worry me at all when now and again I came up with two pieces of the same fabric for the one block - some people just can't so that.  I really love the variety you get from different values.  I have another thirty blocks waiting to be sewn into a top.........

And what am I working on?  Need you ask?  the scraps are coming into some sort of order - 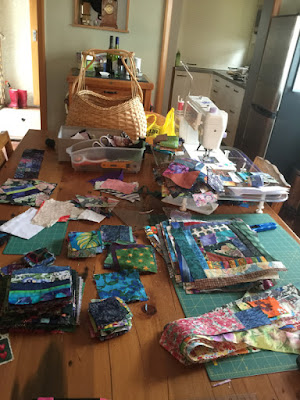 This is my living room table - the plastic thingy that didn't fit into the cupboard, is just right for scissors and extra cutters, there's a pile of ten inch blocks on the cutting mat, together with a pile of ironed strips, and beside the machine is the pile of ironed partly made blocks in need of enlarging; with a pop-up Wimbledon channel on and the temperature dropping by the hour, guess what I'll be doing every chance I get?!

To close, another photograph from Phil of a spotlight effect - 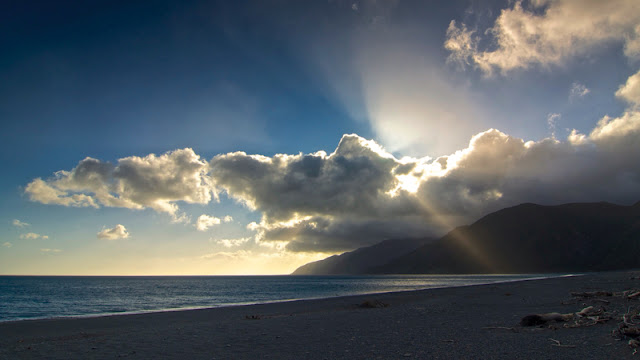 And the thought - "Who can protest and does not, is an accomplice in the act."

Thanks for reading my blog, please come again and feel free to make comments - I love to hear from you.