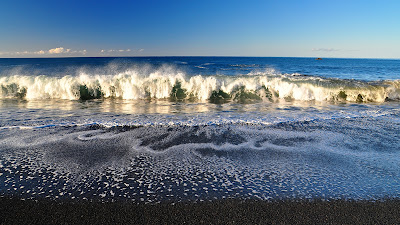 I just love this photo, taken by my son, of the surf off the Wainui Beach.  I'm not quite sure what causes all the froth - but what amazing patterns - I see free machine embroidery and beading to do it justice.......


Here are another couple of pin cushions, the first is canvas work; I used a cross stitch pattern 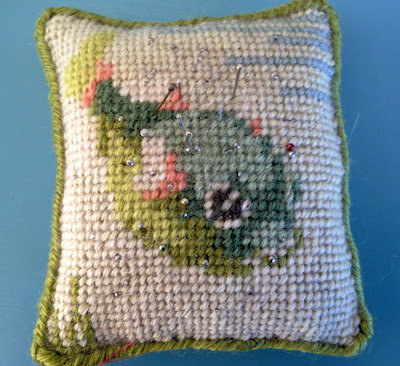 and worked one petit point stitch [or half a cross stitch] per square.


The back was done in the same stitch but using variegated thread and worked in uneven quarters on the diagonal. 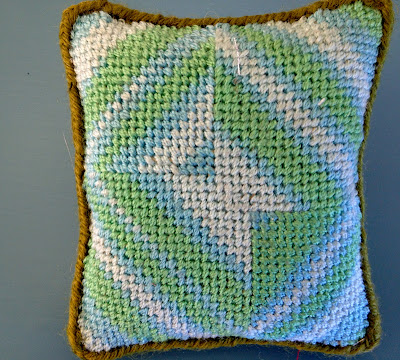 The second pincushion is part of a stitching kit - possibly of use in an emergency but I don't think the scissors would be very sharp! 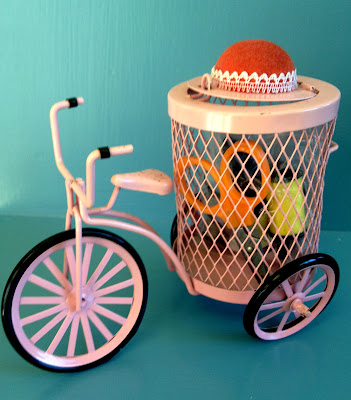 The class I used to teach, Sewing Outside the Square, was based on getting the best use possible for all the charm squares I had acquired over the years.  I was constantly looking for blocks to adapt for the squares and a very basic one is the square in a square. 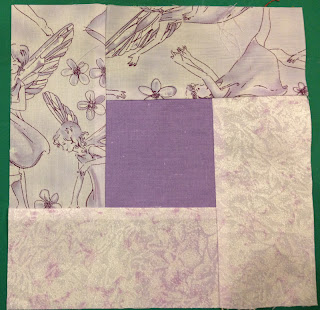 I used a 3" centre square, cut the 5" squares in half and using a partial seam, surrounded the centre.  I decided to put the squares on point and was fortunate I had a couple of batiks for the setting borders. 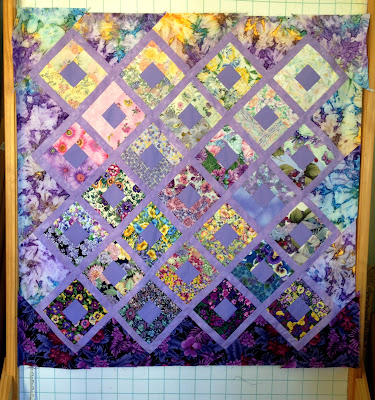 The edges are untrimmed - here is a detail - 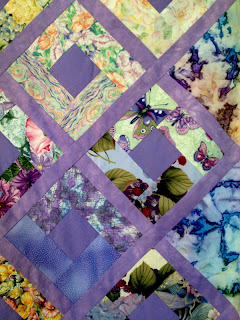 Some variations on this theme,  this one using a bright multi patterned fabric for the centre, 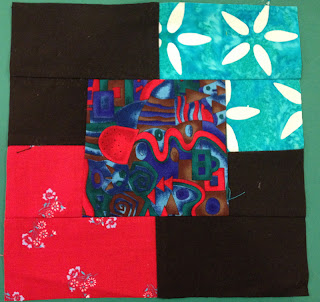 And this one using more fabrics and a more subtle effect 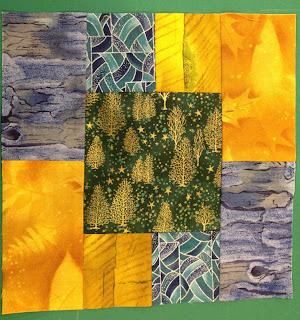 There are other variations of this block, but I'll show just one more, this time a miniature version, almost a stack and whack - 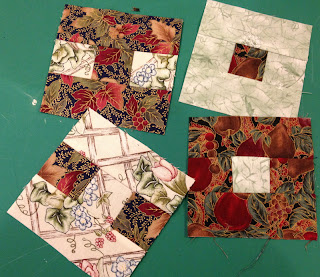 Because they were made using 5" squares, they had to be cut into three strips, each at one and five eighths inch !! There is also some wastage and the block needs squaring up after rejoining the pieces.   I think I would prefer to move up to six inch squares!  anyway here they are from the class, I sewed a few together and will probably do a few more and turn it into a table runner for Christmas. 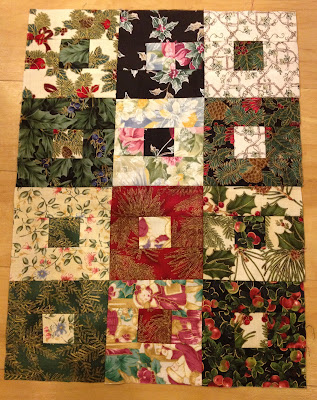 I mentioned my Venetian Dream quilt a couple of times, it's giving me some angst - I asked a couple of friends for their comments which crystalised what I was feeling - so, after some major unpicking I'm feeling happier.  Tomorrow it's on the menu to be ironed and resewn.

Now, to close this evening, here's a photo hot off the camera - I've just received this from my son.  Funny, as I came home late this afternoon from the dreaded supermarket [chocolate was the carrot that got me there!] I noticed the beautiful clouds and changing light and wondered where he was....... 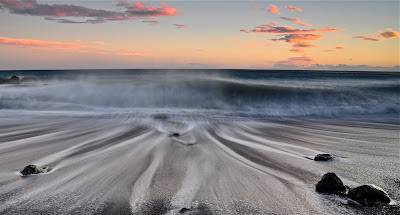 Back to the Wainui Beach....

My thought today, thanks to Anonymous - " The average amount of sleep required by the average person is just five minutes more."  I can so relate to that!

Who turned off the sun?

After weeks of glorious, sunny weather with clear skies we now have clouds sitting on the hills, rain and wind - but we can always get colour from our fabric and our photos, so here's a twilight shot at Castlepoint Lighthouse taken by my son recently. 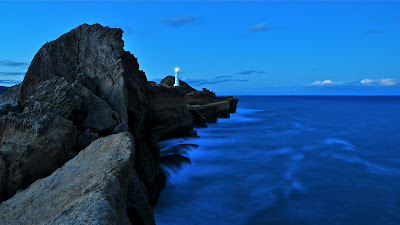 Here's my Courthouse Steps top.  This was made when I started quilting again - or at least piecing - after my husband died, I did a Chinese Coins and then a log cabin variation around a nine patch that turned out to be not a square but I love the result.  While I was piecing that one I worked out my next pattern - do you do that? - I remembered a tin of 3.5" squares which I turned into scrappy quarter square triangles and then used them as the centre for the block. 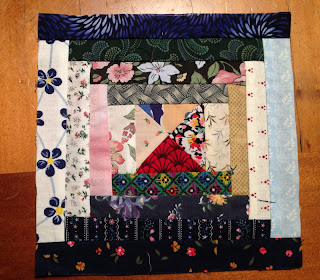 I got a bit carried away with the piecing and on checking the number of blocks I decided to join some after the first 'round' to give the top a bit of life. 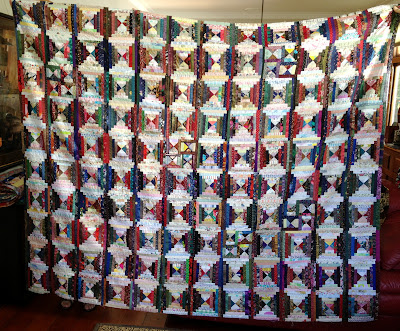 Here are some more pincushions - not quite sure why I had the desire to collect these - didn't William Morris make the observation -"Have nothing in your house that you don't think is beautiful or know to be useful"? well, I really can't say these are beautiful and only marginally useful......... 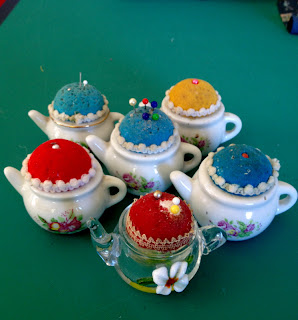 Colourful perhaps and sort of quaint - and then there's the swan - 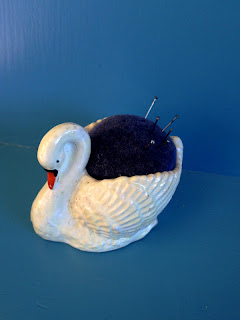 Nice enough to have around the sewing room I think.

I mentioned that I was auditioning borders for a blue/green/yellow strippy quilt - I was having great difficulty making up my mind, so put it away for a while.  My stitching friends gave their opinions and I still wasn't sure - 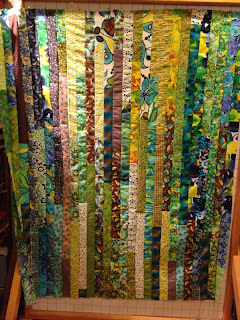 I had cut the strips, again a la jelly roll tops, then had to add more - I must work out the math of doing this type if I'm going to cut my own strips from yardage etc.  and here are the two possible borders - 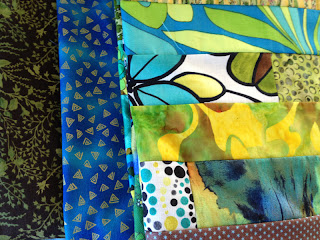 I tried them on the design wall 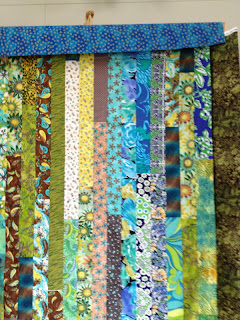 You can see there are modern and vintage fabrics, all of which I like, but it just didn't sing to me!

Then I had a brainwave! and here's what I shall do 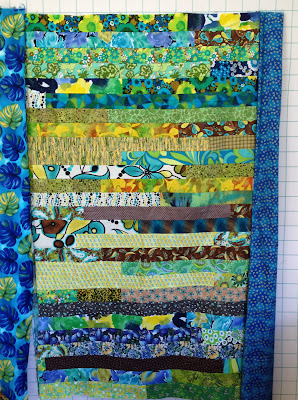 Turn the piece so the strips are horizontal, cut the whole thing in half and use the fabric on the left!  I sincerely hope those wobbles at the bottom are just the way it's hanging!

Thanks for stopping by and remember, "The surest way to be late is to have plenty of time." Leo Kennedy which is a truth I prove all the time! 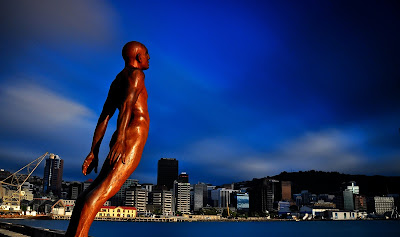 I just have to share this with you, another of my son Phil's photos taken very early one morning at the waterfront in Wellington.  The statue is by Max Patte, "Solace of the Wind" [2008].  On the subject of Phil's photos he has recently set up a pics site, if you are interested in seeing more (do I sound like a proud mother?, well I am!)

I seem to remember saying that I had used up all the thin strips - well, I was mistaken!  I was looking for a particular pin cushion and came across another bag of pale strings - I wonder what brilliant idea will come to me for these?  Talking of pin cushions, 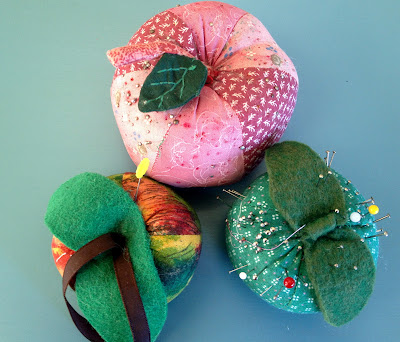 Here's a selection of the "apple" variation.  The top, red one I bought at a quilt shop in Singapore on a stopover there on the way home from visiting family is Kotakinabalu.  Well, it was red, the base still is but the good old kiwi sun has toned it down!

Do you have a collection of pincushions?

Now this is another UFO - not sure if I will ever do anything with it.  I got this far at a class at the Symposium in Hastings in 1989 - what a great time we had there!  Such great hospitality - remember the huge crate of apples, free for the taking!  I quite enjoy the blanket stitching but I think I was the only one in the class who took several different fabrics - fussy cutting is too wasteful anyway...... 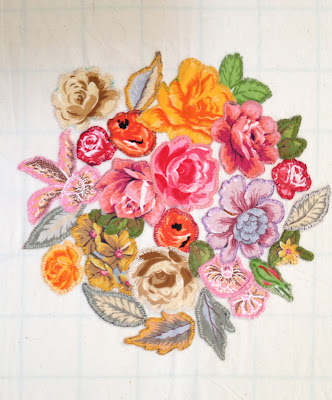 And wasn't this the Symposium, Yvonne, when we managed to take all day to drive back to Wellington?  [4 hours max according to my husband]  We bought some beads somewhere on the trip, mine were autumn coloured - surprise, surprise - and weren't yours pink and blue?

Some time ago I shared the wonky hexagon log cabin that I hand quilted, well when I started piecing it I used light and dark fabrics - then changed to light and medium when it seemed too harsh.  I discovered the partial blocks recently, and decided to complete them. 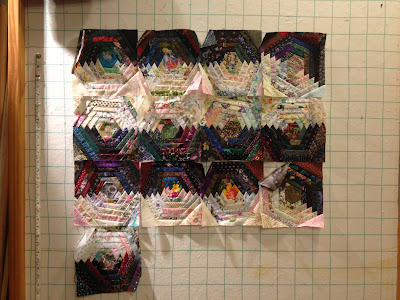 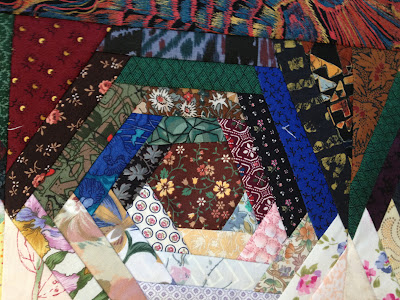 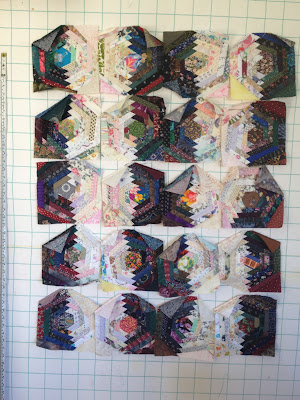 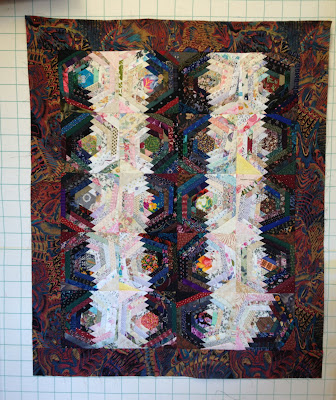 It seems to echo many of the fabrics in the quilt top - and as for the bottom right, well I did say it was wonky!!

The quote I want to share today resonates with me - soon I shall post a photo of my garden, complete with head high nightshade and a carpet of weeds broken by paving stones! - "Nature is a good economist; note the blades of grass which make use of the cracks in your concrete path." PK Shaw

And the very last "word" is a photo, long exposure, taken by Phil near Waitomo 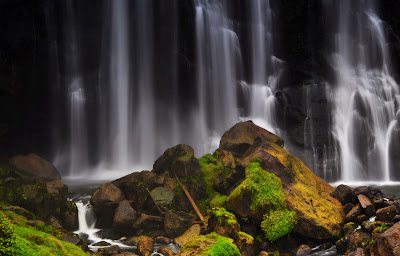 Thanks for stopping by
June