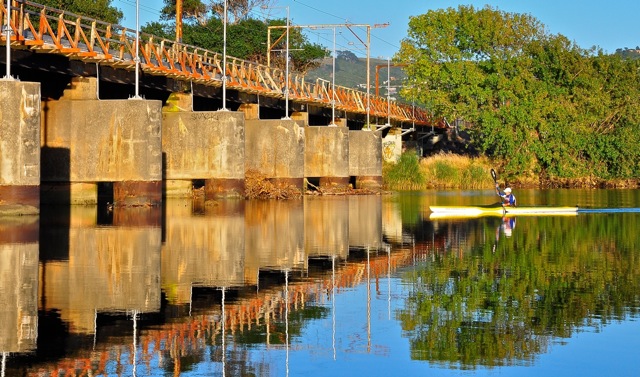 Here's the rail bridge over the Hutt River and an early morning kayaker enjoying the beautiful weather. Aren't the reflections stunning?

I think I showed a quilt some time ago that was my first one, well this one surfaced recently in one of my 'tidy-up the sewing room ' sessions.  It is made from pieces of dresses shortened by the owner of the dress shop in Hataitai back in the seventies and constructed like a "quilt as you go" block. 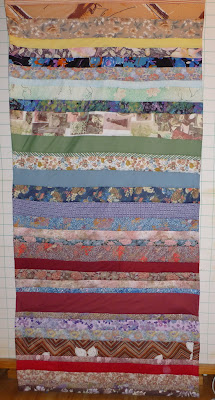 As you can no doubt make out, the fabrics are all stretchy and polycotton; on checking I find the batting which is quite thin, has a layer of butter muslin. The backing is a white polycotton and I finished it off by turning the sides over to the back and hemming them down - same treatment for the top and bottom. It is these days the preferred daytime bedding for Floyd, my black and white cat; folded into four it is perfect for him to stretch out on.

I've just updated the idea by doing another jelly roll type [hope I'm not infringing someone's copyright by calling them that?] I'll share it with you when I decide on the border but by coincidence I was looking in some old books for instructions for cathedral window for one of the Shut-in Stitchers [I'm not allowed to take my iPad into the prison!]  when I came across this quilt 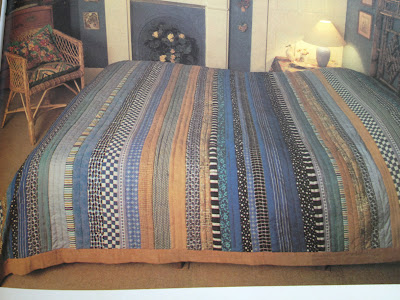 and the book it was in - 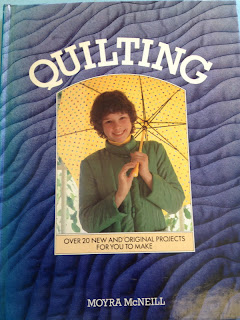 And while I'm on a nostalgia trip, here's my crazy woollen wagga! 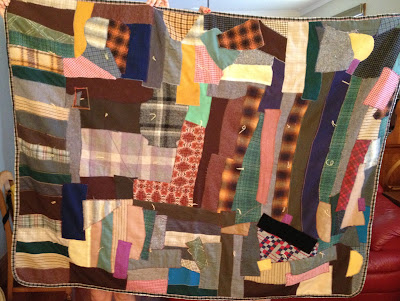 I pinned all these pieces onto an old blanket one weekend after I had dislocated something in my lower back while sitting crossed legged warping up my tapestry loom! the mind boggles - anyway, I spent the rest of the weekend lying on the living room floor and what else can a person do but put together a crazy quilt!

Lots here from my friendly shop owner, the off cuts from shortening trousers and the rest from the scraps of my dressmaking, BQ of course (Before Quilting).  No batting but the backing is red velvet and the binding is satin ribbon.  It is tied with nylon yard which used to be bright orange.  It's a great car quilt for picnics. 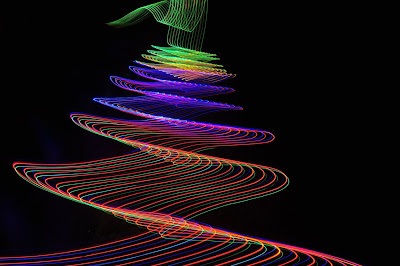 To close today I have a slightly different photo to share; my son was experimenting with photographing light and this is one of my favourites, and a quote that resonates with me, "If it weren't for the last minute, nothing would get done." Anonymous

Nice talking with you, take care -
June
Posted by June at 19:09 No comments: 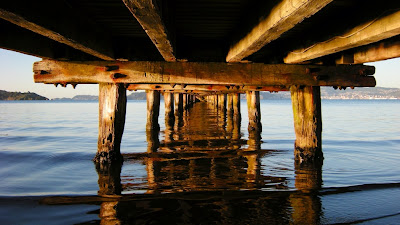 Sunrise under the Petone wharf, can't you just hear the gentle lapping of the water?  As a confirmed night owl I rarely get to see the sunrise, but I do appreciate the beauty of the early light.  You can just see the ripples where the southerly is coming across the harbour - photo courtesy of my son as usual.

I've done more with the string pieced blocks I showed last week, had such fun playing with them on the design wall - 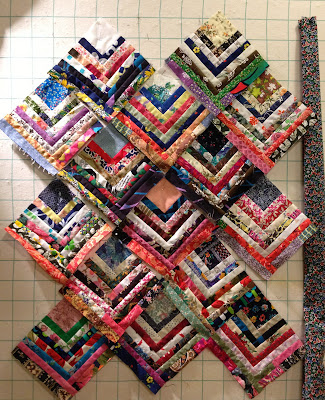 I decided the arrangement on point wasn't right, so 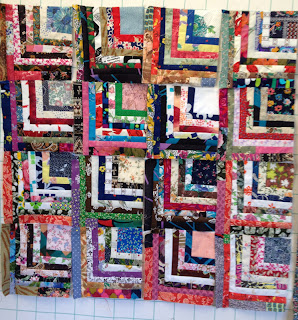 All soldiers in a row? - not really - alternate the blocks then? 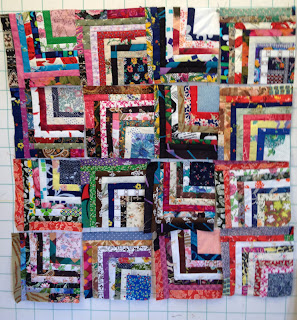 Maybe alternate them in rows? 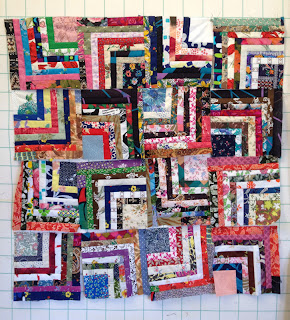 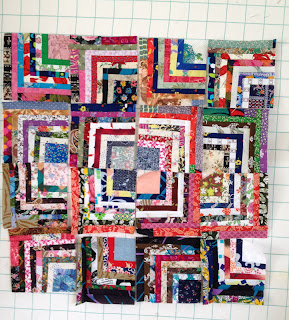 But the corners didn't look right, so 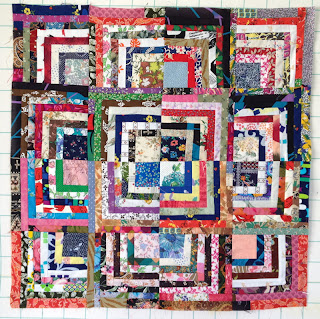 I decided I liked that, so found a border to set it off - 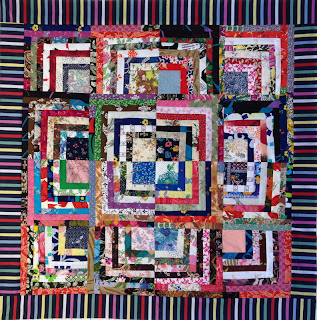 I've been playing with the bright strings and white - will share that with you later. 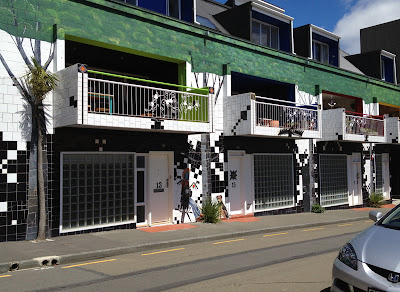 Do click on it to enlarge - the tiles and wrought iron are amazing.

Here's a very elegant tea cosy from my stash of treasures from the Op Shops - I'd be too scared of staining it to use it! 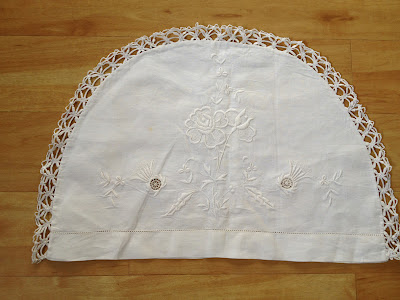 Here's a close up of the stitchery 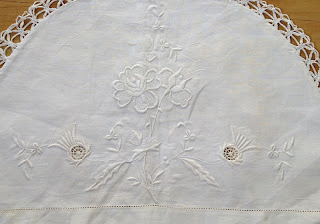 And to sign off this week, we'll go upstairs as it were, and look at what is happening at sunrise on the pier 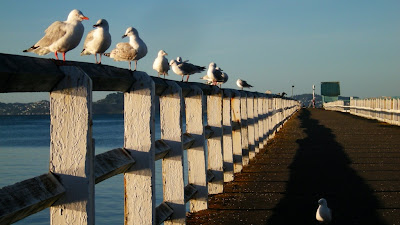 I don't know about the early bird, but one looks as though it's still asleep  - and you can see the ripples getting closer!

Having regard to the latest world news, I think the thought today is quite apt - "It's hard to tell if the world is actually growing worse, or if the new coverage is just better." Joe Moore   !!

Thanks for stopping by and for your comments, they mean a lot.
June
Posted by June at 01:16 No comments:

The golden weather continues and I'm loving it; there's a catch phrase that You Can't Beat Wellington on a Good Day!! - and that's so true.  Here's a recent sunset, taken by my son using a four year old "point and shoot" camera - 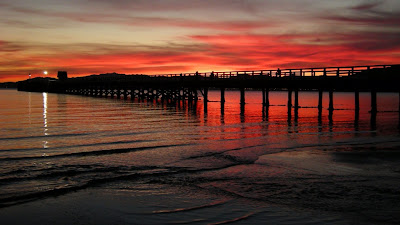 That's the long pier at Petone beach and when you enlarge it you will see the lights of the road to Wellington along the edge of the harbour at the foot of the hills.

I've been doing lots of tidying and de-cluttering around the house so I now have a large pile of 'stuff' in the spare room to take to the Op Shop.

Something I came up with, which the girls had been using in the doll cot, was this cushion - 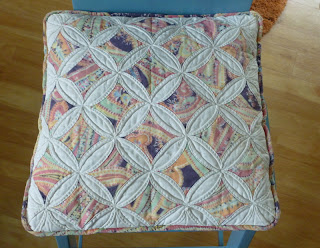 Very delicate colours now, but this was from the left overs of a skirt and the cushion was made in 1980 so it's very faded from the original 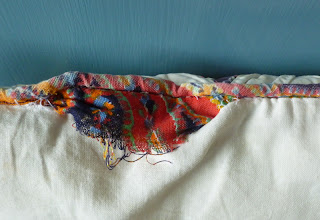 I returned to the UK to see my parents, both of whom had been unwell, and I took this stitching to do on the plane and in airports etc. - those were the days!  I remember my sister-in-law was intrigued by Cathedral Window so we sat on the floor while I showed her how - and she, who swore she would never be interested in patchwork, was hooked! 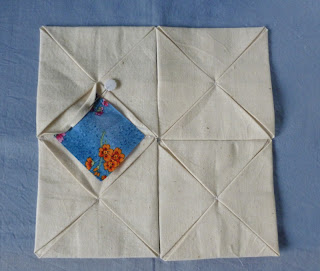 This shows the basics of the technique when done by hand, a square has the edges turned under, then the corners are folded into the centre and stitched down.  The individual squares are joined with an overcast stitch, another fabric square is placed in the centre of each square and the four bias edges are stitched down. 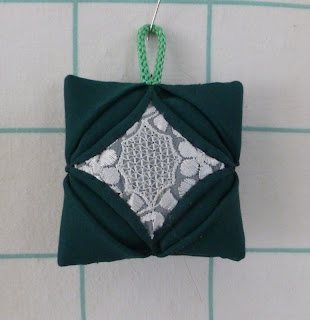 We made Christmas decorations with them, or pincushions.

There was a spell of very wet weather for a day or so, quite a change - and one morning I saw my two cats, Floyd and Basil, sitting by the cat door - Floyd being the look out with his head out -  checking to see if the rain had stopped? 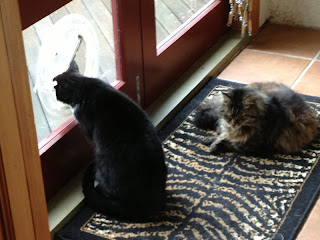 I showed you the coat hanger full of strips of fabric recently, well I've emptied it!!  Yay!!  This is the start of the top that is finished - 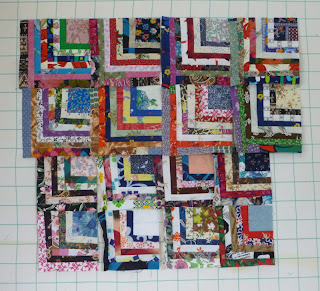 I started it with a large corner square, three inch, then put strips around a la log cabin, decided they were too small so joined several strips a la jelly roll and put them onto the outside - those are the blocks at the top.  Next time I'll show what I did then, because now I want to share with you some of the treasures from my box of lace. 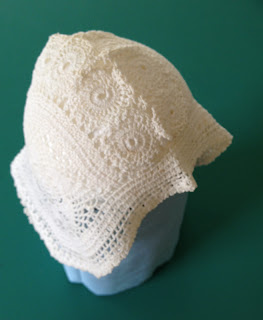 Oh fiddle, I can't seem to get the photos to go side by side. 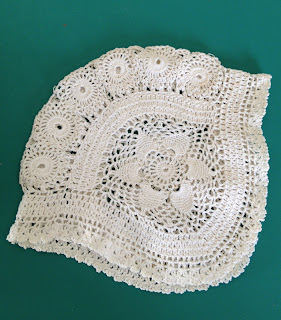 Anyway, it's a beautiful baby bonnet I think, though it has no means of fastening, maybe it's meant to go over a fabric shell?

I'll leave you with another view at sunset, this time taken from the pier looking towards the Petone Esplanade 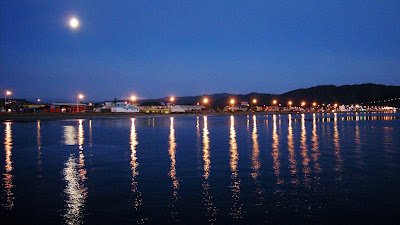 and with this quotation - which very soon will not be understood by our grandchildren, "Be like a postage stamp.  Stick to one thing until you get there." Josh Billings

Thanks for stopping by and for your encouraging messages.
We'll talk again soon
June