Son Phil is in Auckland at present and here are two photographs he sent of the Sky Tower, for non Kiwis, this is the iconic landmark of Auckland.  I think they would make a good starting point for a quilt class - something familiar and then distort it!

First the familiar - this view taken from Albert Park - 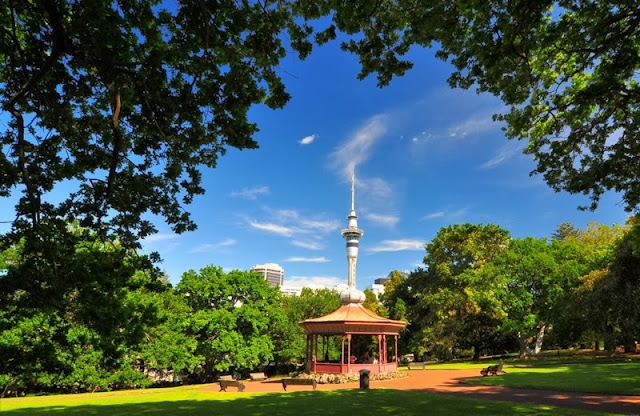 cleverly placed so it appears to be growing out of the gazebo.
The second one was taken right there in the city - but reflected in the glass windows - 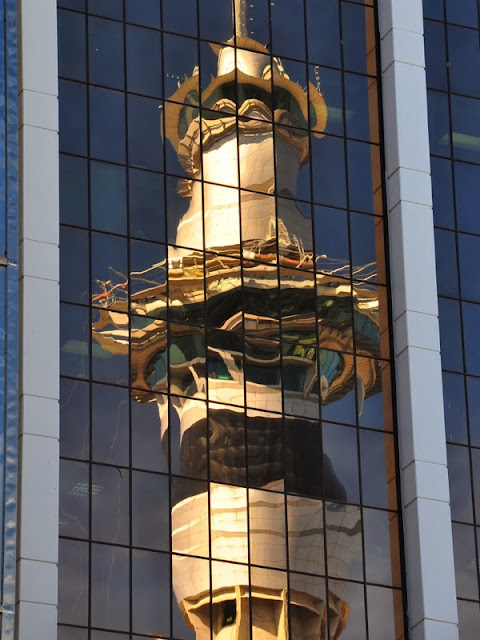 Full of possibilities, don't you agree?

Recently I went to the meeting of Capital Quilters, it's held in the local school hall and often has interesting things on the walls.  They must have been studying recent history - 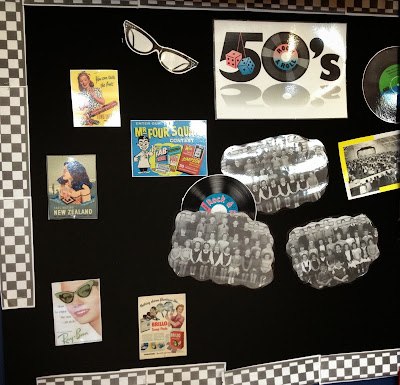 Some familiar images but sobering to realise that the period of my school days is the subject of study in the schools today - it's probably not a history lesson though, more social studies which was unheard of back then.

Also at a recent quilt meeting [I belong to three Guilds] were some quilts by Sandy, the queen of scrap quilts; I particularly love this one - 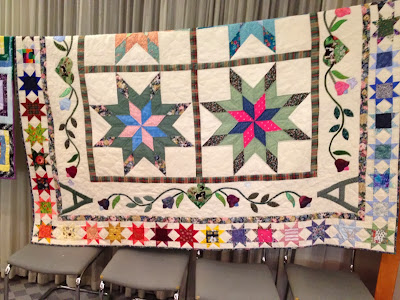 the mixture of piecing and applique works so well.

Back to Capital Quilters and their block of the month - very American I think, maybe because of the red, white and blue..... though it's given the french name spelling........... 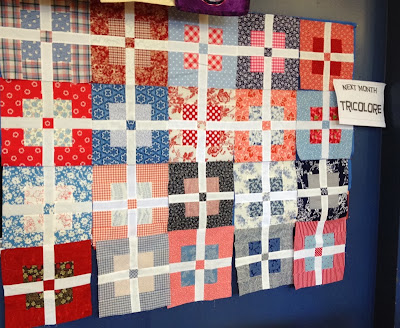 Once again, I think this quilt would look extra good on point.

I need to take another photo of my latest scrap quilt, the one I took is too fuzzy for some reason, but I do have the final cut of my Rainforest, made a la jellyroll; I couldn't decide how to finish it, almost cut it in half and made two small quilts but at a friend's suggestion we unpicked the outside three rows and I put them on the top and bottom. 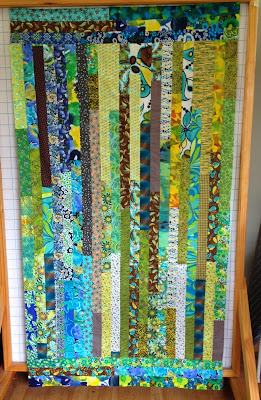 That photo's not the clearest either, however you get the general idea.  I need to get it sandwiched, quilted and off to join the others going to Ethiopia - a project of Pinestream Quilters.  Maybe I'll think of another name too. 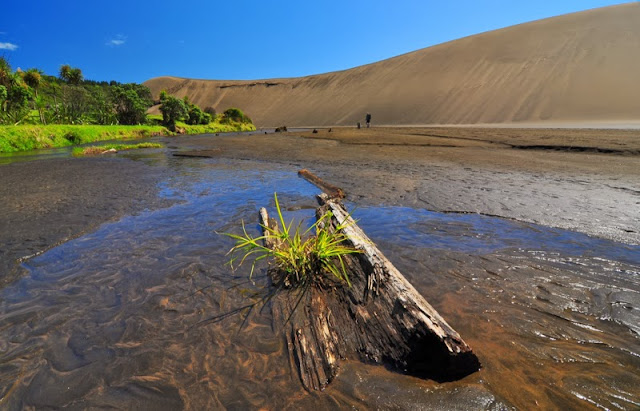 The people in the distance give an idea of the size!

I'll leave you with this thought, "We live in a rainbow of chaos.  Paul Cezanne

Now back to my hand quilting, we'll talk again soon.
June
Posted by June at 00:29 1 comment: 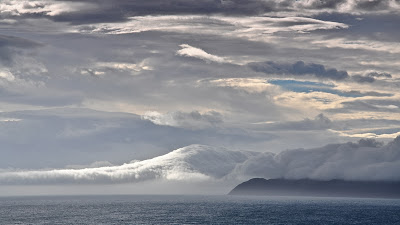 Clouds viewed from Baring Head - aren't they amazing?  Photo by Phil.  It's been a while since I last posted, I seem to have done a lot of running around after my cats lately.  I told you Basil is on a special diet as he has an overactive thyroid which is a bit of a problem, he would far rather steal Floyd's food... but he has found a new place to sleep - 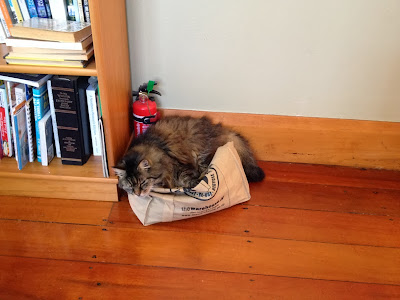 It's a bag full of embroidery wools, left on the floor to remind me to take it back to the sewing room and apparently the very place for him  - with its own backrest too!

Floyd had his check up and he too is on a special diet for kidney troubles - but he also needs medication.  Here I'm going to have a rant at the ridiculous situation where the drug company, I presume, no longer makes his medication in cat size doses, so I was given some capsules - 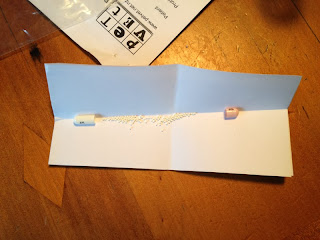 and instructed to divide the contents into four!!?** and give Floyd one quarter of a capsule each day!.....

The little beads are shiny and hard and bounce all over the place - having caught my medicine so to speak, then to get it into him - I tried to put it onto his cooked chicken but that didn't work, then I had a brainwave; he loves butter so I put a blob onto half a rice cracker and pushed the 'beads' down into it.  However upon inspection, the butter was gone but the beads were embedded into the now moist cracker.  So, using the tip of a very sharp knife, I removed them, mixed them with another smaller blob of butter and let him 'steal' it off my finger.

I now use a small dish, warm the butter and if any beads remain they get smeared onto his paw or he can lick it off my finger - but I ask you, who would come up with such an inefficient system?

Phil has recently been on a trip and sent me some great photos to share with you;  first the Three Sisters looking back to the mountain 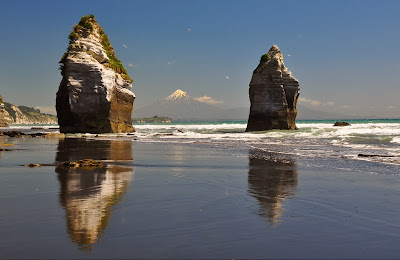 This area is only accessible at low tide - do click on it to get a larger view. 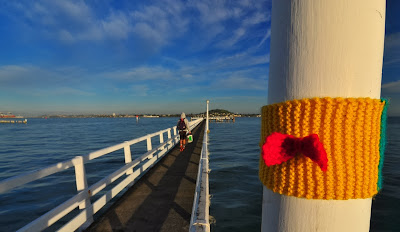 This knitting art was on a pier on the wharf at Tamaki Drive - great fun!

I was reminded that Christmas is not far off, and I must look out this decoration - I think my family might have it because it was designed by one of my granddaughters when she was quite young, before she was old enough to think she couldn't ! 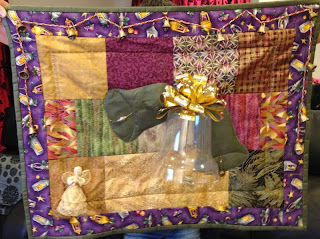 It was a challenge for Pinestream Quilters where we had to use the border fabric - not the usual red and green - the large plastic bell was actually a container for chocolates as I remember it and the bells are from the Trade Aid shop, as was the little angel - 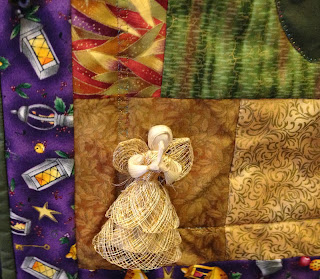 I will leave you with another great photo, this time of Marokopa Falls on the Waitomo Road, which are 30m high and the rocks at the base are the size of house rooms: 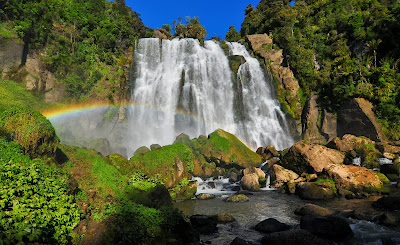 and with the quotation, "We experience moments absolutely free from worry.  These brief respites are called panic." Cullen Hightower