Today I had lunch at the botanic gardens cafe, Picnic, and if you are ever in Wellington I can heartily recommend it.  Just look at the setting - 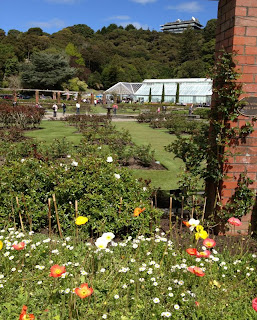 This was taken looking through the rose gardens to the glasshouse, and at the left you can see the tent like roof of the cafe.  Lots of room inside and out - the weather was perfect.  Ducks and ducklings were busy in the grass and the artificial pond - with a lovely notice telling humans not to pick them up or handle them and to please stay away from the ramp out of the pond as it was their only way out!

I walked for miles! and it quickly became apparent that I have been spending far too much time this winter at my sewing machine or my computer - even if the expanding waistline hadn't already made me aware of this! 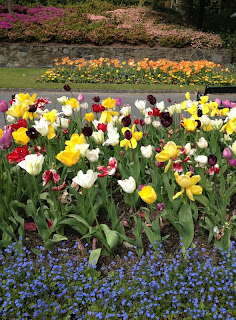 I walked up the top of the hill to the herb garden and then back down to the Rose Garden and couldn't resist photographing lots more - just one to share, a stand of flax with the sun behind - so I marbled it! 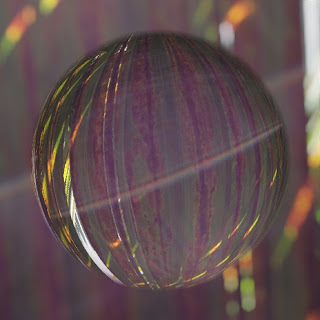 Talking of quilts, Thursday was the opening of the Wellington Guild Exhibition being held at the Academy of Fine Arts. Queens Wharf.  It is open 10 to 5pm until 7th October and is well worth a visit - this is not unbiased of course!

I have the honour to be a Life Member of the Guild and so get an extra bonus in that I am able to choose a quilt to receive my award.  Utterly subjective, I just pick the one I wish I had made, or know I never will or that I want to take home with me; I admit a leaning towards vintage fabrics and hand quilting, but none of these things is set in concrete.

The quilts were hung, the judges had done most of their much more serious judging and I, along with the other Life Members, had our turn.  Later that evening it was such a thrill for me to present the award  to Kay Bruce Smith for her entry, No. 104 "2760+ Hexagons - A+B" - and here it is - 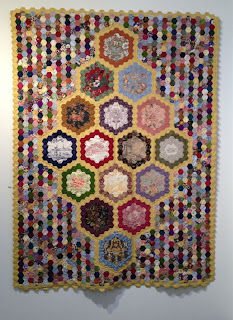 I'm sure the rest of the prize winners will be shown on the Guild's website if you are interested.

"Men always want to be a woman's first love - women like to be a man's last romance." - who else but that old cynic, Oscar Wilde - but as always, holding a lot of truth.......

Thanks for stopping by
June

A bear, a bag and some blocks

But first, this glorious euphorbia! 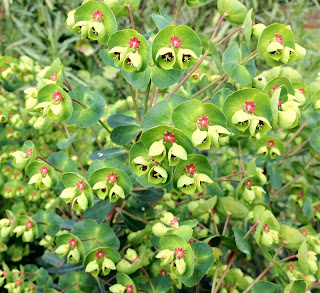 I do hope it will enlarge ok because I am astonished by the intricacy of the flowers.  Aren't they amazing?

And an apology for letting the days gallop by without taking myself in hand and just sitting down at the computer to write!

Anyway, I'm here now on this sunny Sunday afternoon; I went into the garden to put some cardboard boxes into the boot of the car ready to take to the recyclers tomorrow, noticed a whole lot of weeds in between the stones where the rain had flooded last week, so stopped to pull out a couple........

Several broken nails later and an aching back I have come inside to enjoy a cup of tea and decided now would be a good time to chat with you.

I now share my bed - with a large bear! 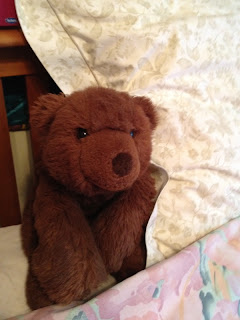 He is very soft and cuddly, even has a squeak in one paw and was shared by my granddaughters when they were little.  He has an interesting history; when my late husband was in the Mary Potter Hospice for the final week of his life, they allowed me to room with him....... and one night one of the wonderful nurses suggested I have a lavender bath before bed and when I returned to the room, there on the bed was Aloysius!  She said they kept him for the family when they needed special comfort.

Then some weeks later I visited a friend's house and was amazed to see "Aloysius" on her couch - well this bear was waiting for an operation on the stitching and a friend of my friend owned the shop where these bears lived before being adopted out!!

When Sharon [the shop owner] heard the story she insisted that Aloysius just had to come home with me, wasn't that a lovely thing to do.  And why is he now back on my bed you may ask? well I am tidying the spare bedroom, always known as "The girls' room" and with help from these same girls, now young ladies, I am having a clear out - many soft toys were  passed on to the Op Shop, but Aloysius just moved rooms.

Among the toys to be tidied - and what a trip down memory lane that is turning into - was a set of wooden blocks.  You know the kind where there is a different picture on each of the six sides.  This particular set must be fifty years old and was used for building blocks when the novelty of the pictures, and some of the paper, wore off. 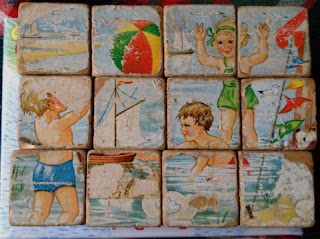 And the bag - well I mentioned I was making one for Molly, the younger of my two granddaughters and she chose the fabric from my stash. 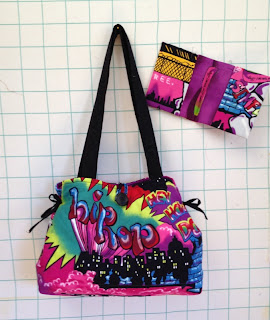 Real street art!  She didn't want a pocket on the outside, there are several inside - the the little notebook cover was made by Jan who recently taught this bag for Pinestream Quilters - I made one for myself as her guinea pig and when Molly admired it, we have made one for her too.  I have to say 'we' because Jan gave me a great deal of help and I will give Molly her bag tomorrow.

And now, just to prove that I am still stitching, I finished the Mountain Garden and took it along to the Wellington Guild meeting and today I made a sandwich of the top my granddaughters made by drawing onto calico - thought I'd better get a move on before too much time passes!  I intend to use it as a curtain over the back door, not for warmth  as it's double glazed, but for privacy as the bathroom door is opposite.

Here's another block from my Five Inch Squares class to share with you.  The quilt was called Give and Take and was in a rather old Quilters' Newsletter Magazine, I made some changes and the block is perfect for the squares. 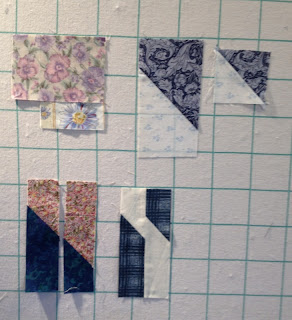 It's the usual method of putting the two strips right sides together, mark the diagonal, sew two seams for the extra half square triangle, but it's the large one that goes into the quilt.  As it's quite chunky, I tried slicing it down the centre and rejoining - that's the bit at the bottom.  I think it could make an interesting border......

And the quilt - the pattern is all in the placement of the colour values of this one simple block. 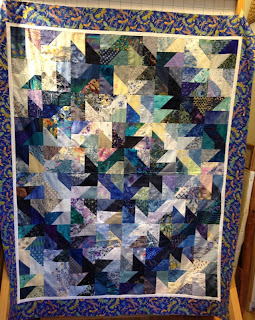 I love the dragonfly border - chosen by - who else, my granddaughters!

This is so true - "Those truly linked don't need correspondence, when they meet again after many years apart, their friendship is as true as ever:" by Deng Ming-Dao

Or am I feeling guilty because I haven't contacted my family for ages.....

Nice chatting with you
June
Posted by June at 21:34 3 comments: 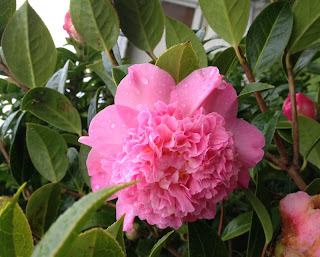 I have to admit it's beautiful, though I wish it were any colour but pink!

Now that I have had some awful weedy large shrubs taken out, the smaller camelia bushes are doing so well.

And the orange monsters, the rosemary, pineapple sage and the euphorbia I asked about recently ensure that the garden is not wholly pink.

I want to share with you another block that is part of my five inch squares class.  I found it in an old magazine, the method used was to make templates of each of the pieces, so I looked for another way.  Here are the steps I took - 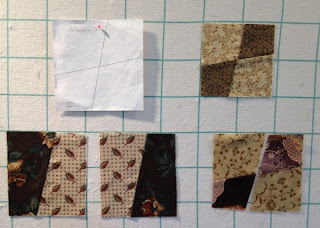 The block is to the right at the top, the plan to the left - simple isn't it?  Just one point to remember, the five inch squares are put on top of one another with the right sides up; cut through both on the angle prescribed, swop pieces and resew - as shown at bottom left.

Then put the resewn pieces, again with right sides up, and light fabric over dark, cut again on the same angle, swop and resew.  Take care to ensure the pieces meet in the centre and then square off the block.

I decided to put mine inside another square so the pointy bits were up and down, then I looked for borders - 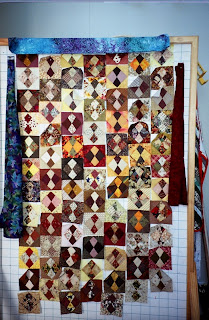 but I eventually decided on a stripey batik but I did drop the blocks, I thought it looked almost like argyle socks, hence the name. 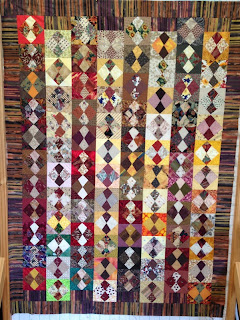 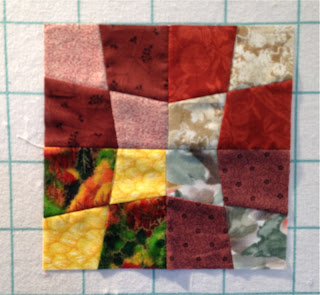 When you make the first cut and resew, the resulting little block can be used, trimmed to a square, like this - 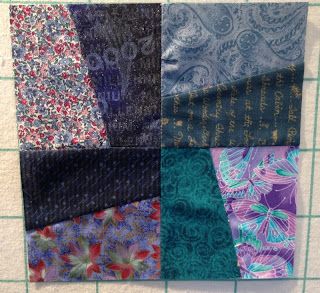 and this one goes together well, it's a good basic boy quilt - 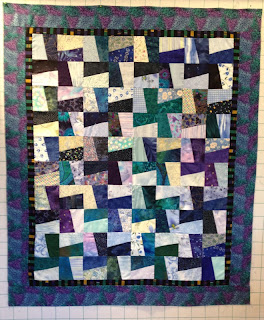 though probably with a slightly less girly border.  If you use a sharper angle for the cut, you end up with a different effect - 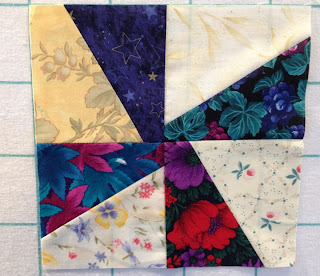 I hd a great stitching day yesterday with friends, and have made good progress with the bag for my granddaughter - and then my machine gave an almighty crack and froze!  It is a little old Elna Lotus I bought years ago when I was an agent for a company making embroidery kit sets.  I used to pop the machine behind the driver's seat in the car, pile in my container of sewing supplies so that I was ready to get to work as soon as the shops closed.  I rearranged my motel room to accomodate the machine and iron and a space for cutting, and off I went!

I realised I hadn't had it serviced for years but my local repair man is quite sure he can fix it.

I did some tidying up recently and came across a receipt, so twenty five years ago - yoiks! - on October 10th 1987 I bought some embroidery threads at The Silver Thimble, in Oakville, Ontario, Canada.   I wonder if the shop is still there.

My quote today, so appropriate after the great time we had yesterday - "A friend is someone who sees through you and still enjoys the view.  Wilma Askinas

Nice talking with you, and welcome to my new follower
June
Posted by June at 03:56 3 comments: