Hills and cats and waterfalls!

So much in this photo that is beautiful, the lines and colours and textures - taken near Tapanui by Phil, looked at sideways it's almost a strippy quilt........ 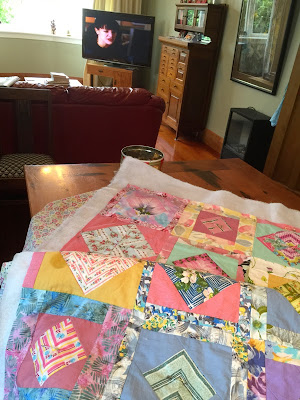 I was able to bring two quilts out of the prison to be photographed - the photograph albums form a big part of the aids we use as other women get inspiration for their next quilt. 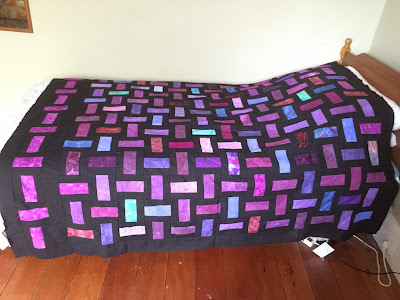 And no, this is not a private prison somewhere, but on my spare bed!  I love the use of the bright batik scattered around.  This postcards pattern is a favourite. 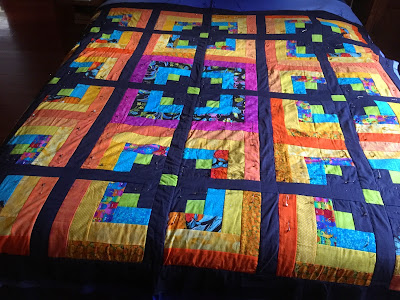 Great to see such a variety of fabrics being used so successfully - these are yet to be quilted of course.

Talk about a week of nostalgia, this time last week the flood waters were retreating but the photos I saw reminded me of an earlier event - just before Christmas 1976 in fact and I was delighted to find an old photograph, actually a slide that I'd had digitised along with lots of others when I found  they were going mouldy. 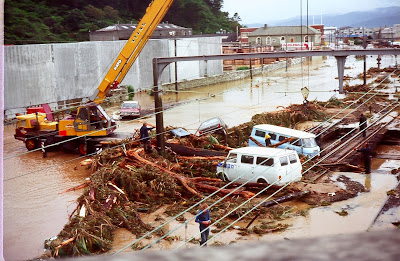 My husband took the photo from the bridge into Petone on his way to our workshop the next morning.  There wasn't as much debris this time!

Phil found some waterfalls when he was down south staying in Gore; he drove to the Catlins where there had been a lot of rain and took this one of the McLaren Falls - stained like tea after the rain. 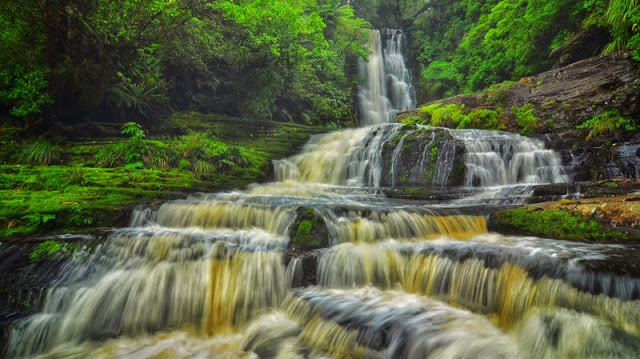 I did a bit of walking before the rains - memo to self, get off your backside more often! I am so lazy.....anyway when I took a short cut behind the community house I saw this lovely animal in the grass. 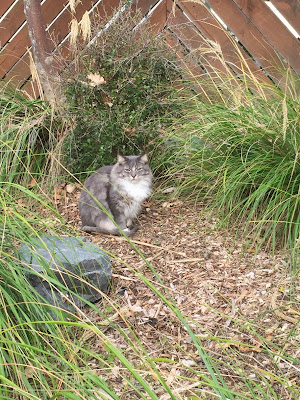 He was quite happy to be photographed, very much lord of his domain and accepting all compliments!

There was more nostalgia at the meeting of the Karori Arts and Crafts group which I joined recently, good to meet people I hadn't seen for ages and, such a surprise, I met someone who came from the UK and went to the same secondary school - Chichester High School for Girls - I came from Selsey and she from Bognor Regis which is just along the coast to the east of Selsey.  My goodness me, did the memories fly! the names of teachers I hadn't thought about for over forty years; it was such fun and I've had some weird dreams this week!

I'll leave you with another glorious photo of the misty hills and the thought that "Laughter is by definition healthy", Doris Lessing 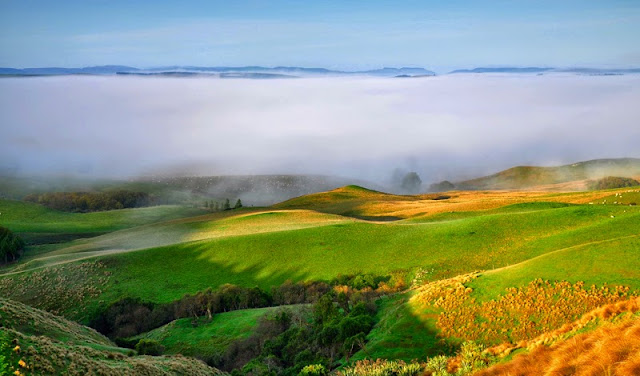 Nice chatting with you,
June
Posted by June at 22:01 2 comments: 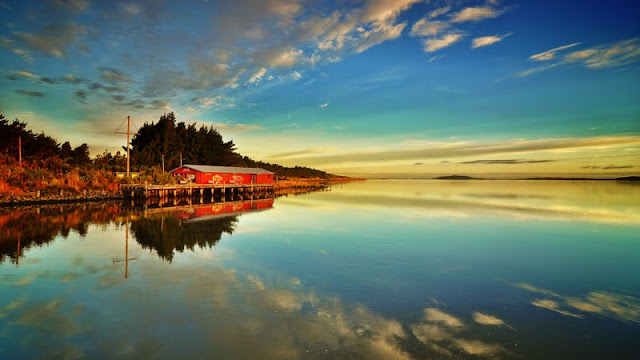 The Oreti estuary at Invercargill,  photo taken by Phil when he was down there towards the end of the filming of Pete's Dragon; he made the comment on Instagram that he thanked the scout group for painting it this beautiful shade of red!

There has been some progress on the quilting front - sort of two steps forward and three back! but I'll not be discouraged!  I finished quilting the top I showed in my post on March 1st [I haven't worked out yet how to make a link to a single post...] and have put on the binding, now it needs hand stitching and with a couple of meetings coming up, that shouldn't be a problem. 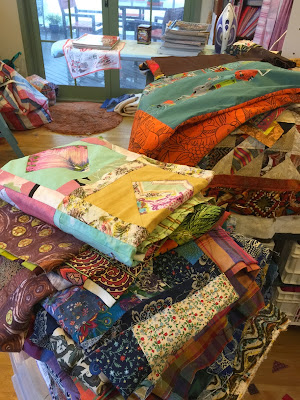 these are not simply flimsies, they have backing folded up with them - except for the orange and green back which should be orientated sideways to show off the picture so it's put aside for a while.... I took the other quilt from the top of the pile nearest the camera, spent a very pleasant time pinning it while watching NCIS [starting from series 1!], then did one line of machine quilting - and spent a couple of hours unpicking it.

I am even contemplating hand quilting it........watch this space!

Quilting at the prison has been progressing well, I took out this quilt to get some matching blue thread for the quilting - 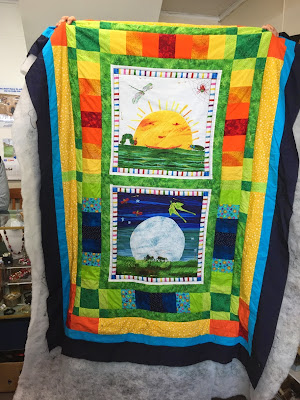 The panels were donated but Persephone [do I need to say that's not her real name?] has chosen well, and done some very neat piecing to complete the top.  She is machine quilting and will then hand quilt the actual panels.  I was delivering more Pet Pads to the SPCA shop in Petone so asked one of the assistants to hold up the quilt for the photo. 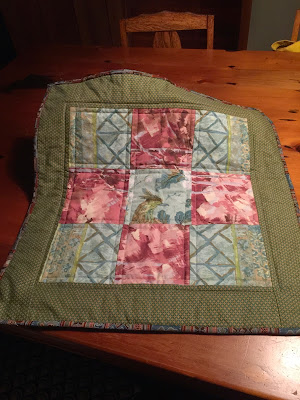 It's a sort of tradition that after teaching at Arohata we go along to Porirua to have lunch at  Kaizen the coffee shop in the Pataka complex.  Last week we then visited Spotlight to buy some vliesoflex, and I was most pleasantly surprised when a fellow quilter stepped up and offered to buy it for us!  I was most happy to accept on behalf of the Shut in Stitchers - quilters are so generous in their support; I am most grateful.

I saw some interesting fabric on one of the stands - 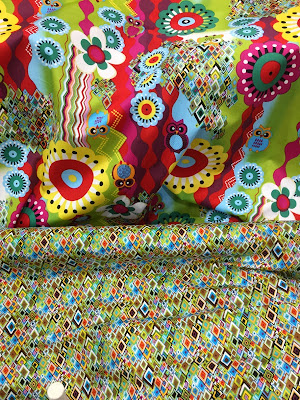 It was actually the lower fabric that caught my eye [repeat after me, I do not need any more fabric!] and then I saw the companion piece - interesting.........

Then there was this - 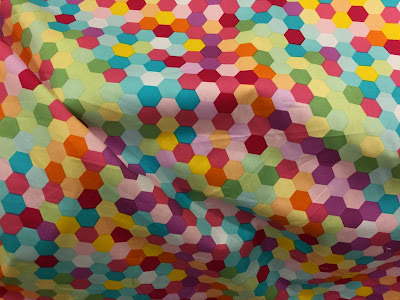 What about using it as the border of a quilt?  Do you think anyone would believe they were real?

Time for another photograph - taken at, I think, Worser Bay - gorgeous name that, tradition has it that a resident used to answer that when asked about the weather........... 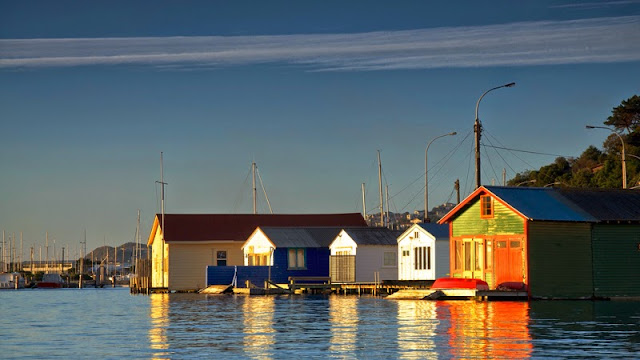 This was taken by Phil on his way to the airport in Wellington, early one morning.  Love those colours, and see, Wellington isn't always windy!

At a recent Capital Quilters' meeting, I was very taken by the block of the month - a variation on an old pattern but get these great fabrics! 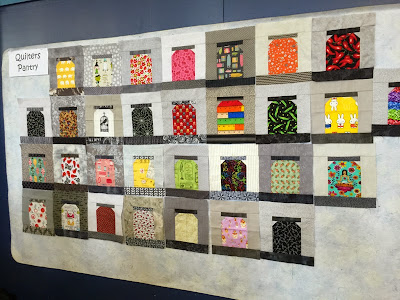 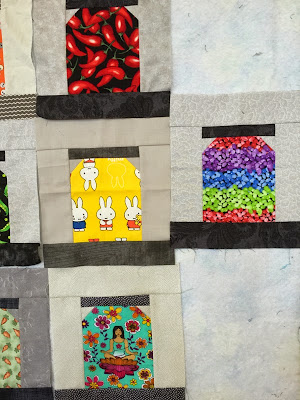 A bird in a cage? love the spider webs! 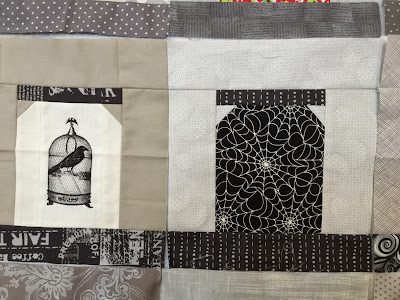 I'll leave you with the quote from Herbert Henry Asquith, "Youth would be an ideal state if it came a little later in life." 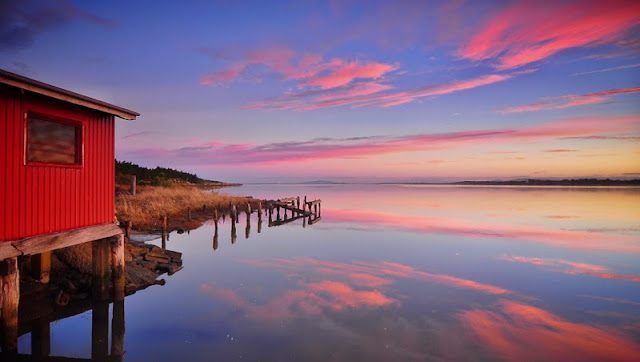 back to the estuary and this photo taken by Phil,
thanks for visiting
June
Posted by June at 23:04 2 comments: