It's a whole new world.

A different view of one of Phil's favourite spots, Castlepoint,  the lighthouse is waaay in the distance and that's where most of the photographs are taken.  This gives a good view of the spine of land along the outer rim; if you've got Google Earth you can see exactly what I mean...

Did you see the TV programme yesterday evening about the group of Birders, as opposed to bird watchers or twitchers, who went to North Korea to see the birds that fly from Alaska to Foxton beach,  then on the way back, they stop off on an island between China and North Korea? - ooops, that sentence is way too long!

I found it a fascinating documentary, as much for what wasn't shown or talked about as for what was.  I do hope that, now the ice is broken, we will get to see more of what appears to be a very interesting country.  From the glimpse of colourful clothes, their art appeals to me.

So does this, by Edrica Huirs [do hope I copied that correctly] - 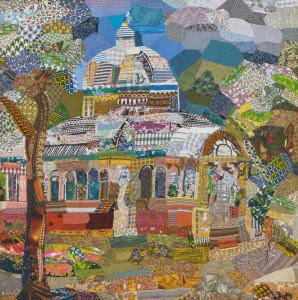 It's called "The Palm House".

Have I mentioned that I used to collect rocking horses?  It started when I was in Canada and I saw a folk art piece, a small blackboard, or slate that was used in schools - many years before my time I hasten to add - something about it appealed to me which I believe is the start of the slippery slope. 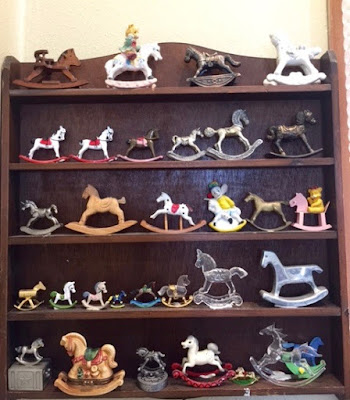 Then I  began to wonder whether this was how I saw myself, as someone unable to run freely....hmm so I bought this Pegasus from a junky type shop, can't get much more free than this - 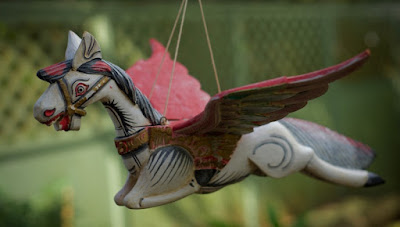 Not exactly a pretty face, but a happy one I think.

It feels good to be talking to you again, thanks for being here, time for my lunch, so I'll leave you with another of Phil's photographs and the thought, "Gratitude is the heart's memory," French proverb.

Closer to the lighthouse at Castlepoint.