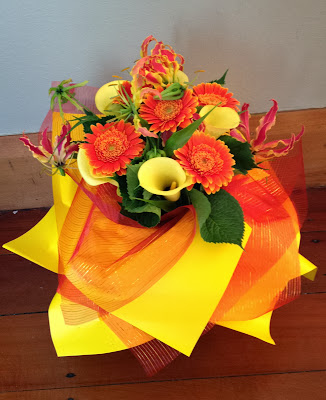 This is the bouquet I received today from the Wellington Quilters' Guild to congratulate me on being awarded the Queen's Service Medal "in recognition of my services to prisoner rehabilitation programmes" - in other words the quilting programme at Arohata Women's Prison.

Janet Forbes and I are both recipients of the award, Janet runs the programme in the Drug Treatment Unit - and of course, we both acknowledge the fact there is a team of people making this possible; other tutors, people who keep the fabric storeroom organised and others who do the fund raising plus the quilters from all over the country who donate fabric so generously - I just happened to be the President of Wellington guild all those years ago when it was suggested that we offer to teach at the prison.  I recall that after just three weeks of the proposed six week course I realised I couldn't just walk away and I made sure the incoming President knew that I was happy to carry on.  I confess to feeling a bit of a fraud being rewarded for doing something I'm passionate about!

Anyway, Leeann, bless her, posted this news yesterday, so again, thank you Leeann.  I also want to wish everyone a Happy New Year and being a superstitious soul, can't do that before midnight!  Comes from celebrating new year for so many years in Gisborne with some wonderful Scottish friends; many great memories there!

I have managed a small finish, my little white and bright strippy is now quilted - finally - by hand, using white in the white strips, it even has the binding on. 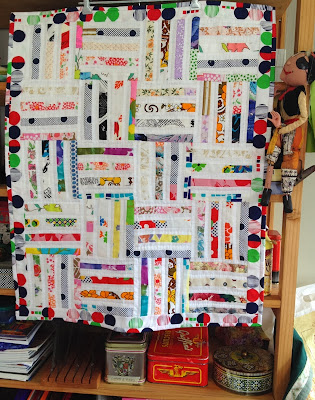 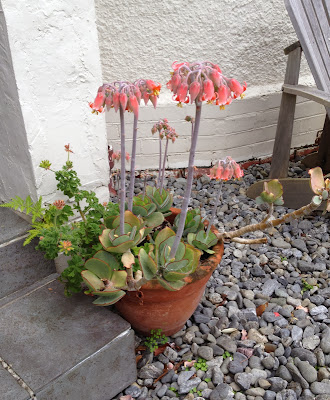 It's been an expensive time at the vets lately, both cats are on special diets, Basil for overactive thyroid and Floyd for kidney trouble - they don't think much of their food though, this is the look I get now when I fill their bowls - 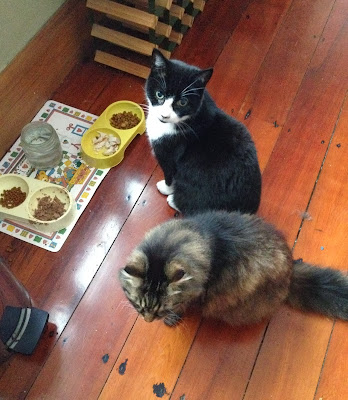 It appears I have seen in the new year, so I'll get off to bed it's ten to one on New Year's Day! and to close, here is a photo taken by Phil on Boxing Day out at the Wainui coast just before the rain and winds came back. 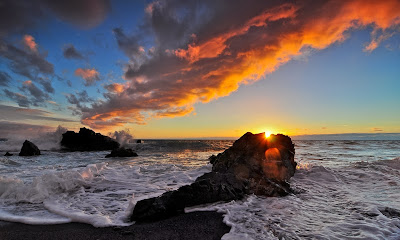 Happy New Year, good health and happiness to all. 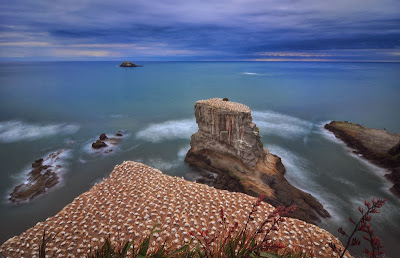 Photo taken by Phil recently, do click on it to enlarge.  I think the colours and patterns are beautiful.

I've been doing some piecing, more strings when I seem to remember congratulating myself at finishing my supply of them.......... well, after some more tidying, there's enough to half fill one of those big striped bags that are so useful when carrying quilts around. 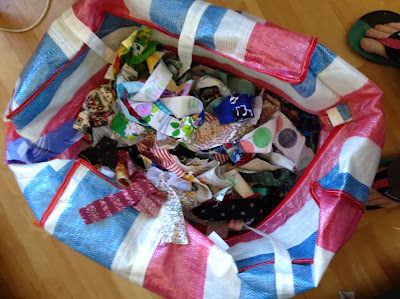 I made a top using the pattern from a block of the month at Capital Quilters, I debated whether to border the quilt and then this fabric leapt out at me! 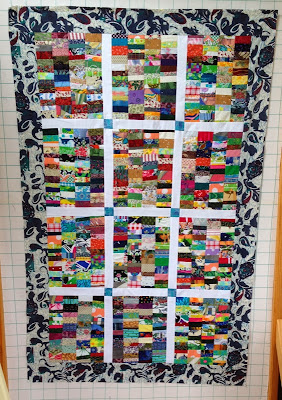 I found a couple of old telephone directories in a drawer, so decided to use the pages for my next string quilt - the books are quite small, so I left the pages whole.  This is the first one I stitched and then trimmed -

A fairly eclectic mix of fabrics, and I'm happy with them - but, I made such a basic mistake, I could kick myself. 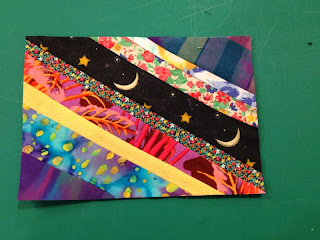 I should have cut the pages to the required size, then covered them and trimmed the fabric - but should have left the seam allowance free.  It makes joining and removing the papers so much easier.  I haven't made one like this for some while so had forgotten.

One of the reasons I haven't posted much lately is that I was having problems with the pills which seemed to be producing some unpleasant side effects.  Once more the doctor has altered what I take, and I'm so happy to be sleeping better and having more energy.

Not enough to want to do the gardening however, and my Hire a Hubby is working wonders - if it doesn't rain tonight, I'll be out there watering tomorrow - the newly planted hebes, manuka and cabbage tree need some tlc with our lack of rain and strong winds lately - Wellington was "well ventilated" today according to the weather reporter on the TV!

I mentioned once before that my garden had a lot of pink flowers, well one of the hebes is also pink but I couldn't resist one named Audrey Hepburn! and the orange monsters are putting on a good show - 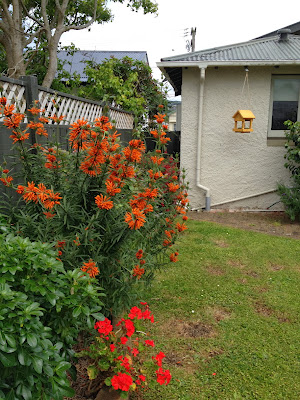 The sorry state of the lawn is because Peter (the hire a hubby) has sprayed to get rid of broad leafed something or others - and the hanging bird feeder is a recent purchase - which I had thought was a waste of money as the birds ignored it for weeks, now the smaller birds are making good use of it.

I'll leave you with another photo, this one is Maori Bay which is just north of the Gannet Colony - you can see it in the distance. 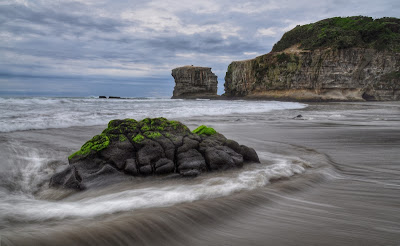 Will I post again before Christmas Day? well now, I braved the dreaded Mall today - fairly early and with the help of some very pleasant people I found just what I wanted in a short time - if we have cold weather from now on, it's my fault - I bought three lightweight summer blouses - how could I resist the "buy two get one free".

As Robert Block once said, "The man who smiles when things go wrong has thought of someone to blame it on."

Thanks for stopping by, all the best for Christmas!
June
Posted by June at 02:43 9 comments: